A Veterans Affairs hospital in Illinois kept veterans’ remains in a hospital for 45 days or more, until they were “stacked to capacity,” according to a whistleblower.

This news comes amid a report by the Washington Free Beacon that veterans with cancer died after delays in care at a New Mexico VA hospital.

I thought reforming the VA was going to be a priority for President Obama. Where are the speeches, the events, the TV appearances about our nation’s ailing veterans? Obama would rather appear on late night talk shows and YouTuber channels.

Instead of helping the thousands of veterans who are getting substandard care and those who are dying because of it, Obama is focused like a laser on the exceedingly rare cases when a white cop unjustly shoots an unarmed black man. His presidency is about him and the handful of issues he gets excited about.

I don’t think he cares that much about our veterans’ sacrifices. That’s the only explanation I can think of for his lack of attention to this issue. Veterans are about war. Obama is about peace!

The Obama campaign is using veterans to grow its email list, placing on its website an offer to let people thank veterans for their service as long as they enter their name, email address, and zip code.

The campaign employs its email list to contact supporters and potential supporters and marshal them in various campaign efforts. Getting the zip code is also important because the efforts, including door to door canvassing, are highly localized.

This Veterans Day, we’re honoring our nation’s veterans and military families for their service. Leave a personal note of thanks or share your reason for celebrating our men and women in uniform.

The note abuts a form into which you can place your “personal note of thanks.” The note is not a required field, but the email address, first and last name, and zip code are.

The note is accessed by a link included in a message from Obama 2012 Campaign Manager David Messina touting Senate passage of an Obama-backed proposal to provide tax credits to businesses that hire veterans. The Messina message is on the website and was also sent to those on the email list itself.

This wouldn’t have happened without your persistence and the President’s refusal to take no for an answer.

A political campaign exists for one reason only – to elect a politician. Everything it does, by definition, is political. The Obama campaign ought to keep our veterans out of its reelection effort, particularly on Veterans Day.

Saluting the veterans is fine – campaign operatives are people too. Using them to build your campaign is disgraceful.

To their credit, each of the leading Republican candidates – Mitt Romney, Herman Cain, Newt Gingrich and Rick Perry – has a tribute on their websites to our veterans. None of them asks for your email address as part of the tribute.

Well, the Obama public image masters have finally done something right for a change.

After repeatedly presenting Obama the snarling partisan ripping into Republicans for . . . partisanship . . . the O Team at last put their man in his best light, offering up a statesman and an inspirer to speak to the Disabled American Veterans conference in Atlanta. 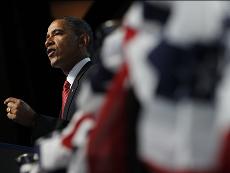 Obama delivered moving stories and commentaries on the plight of U.S. veterans, spoken in a dignified tone that nevertheless did not lack for emotion.

At one point, he noted an “Amen!” interjection from the crowd, followed by a series of “right on”-type punctuations to his remarks typical of black Baptist churches, and he drifted ever so slightly into the cadence of an African American preacher.

It was certainly nice to see Obama get as passionate about his role as commander in chief as he gets about electric vehicles.

While he greedily claimed credit for Iraq war successes without a tip of the hat to former President Bush, who set the table on Iraq so Obama mainly had to eat, the president at least avoided blaming problems on his opponents and put forward the kind of unifying message that got him elected in the first place.

Remember, our nation has had vigorous debates about the Iraq war. There are patriots who supported going to war, and patriots who opposed it.

But there has never been any daylight between us when it comes to supporting the more than 1 million Americans in uniform who have served in Iraq; far more than any conflict since Vietnam.

There are two Obamas on the public stage, and it is to his detriment. Believe me, there are staffers of his with a sure penchant for meanness and partisanship. When they rule the day, he does worse for himself politically.

But of course, they don’t rule on their own. He lets them. It makes you wonder if this youthful and inexperienced president really knows who he is.