This is not great. Although the source is the Washington Post, which has gone so off the deep end against President Trump that they are hard to trust. Still, it seems the news is backed up by documentation.

President Trump’s company charges the Secret Service for the rooms agents use while protecting him at his luxury properties — billing U.S. taxpayers at rates as high as $650 per night, according to federal records and people who have seen receipts.

Those charges, compiled here for the first time, show that Trump has an unprecedented — and largely hidden — business relationship with his own government. When Trump visits his clubs in Palm Beach, Fla., and Bedminster, N.J., the service needs space to post guards and store equipment.

Trump’s company says it charges only minimal fees. But Secret Service records do not show that.

And at the Trump National Golf Club Bedminster, the Secret Service was charged $17,000 a month to use a three-bedroom cottage on the property, an unusually high rent for homes in that area, according to receipts from 2017. Trump’s company billed the government even for days when Trump wasn’t there.

These payments appear to contradict the Trump Organization’s own statements about what it charges members of his government entourage. “If my father travels, they stay at our properties for free — meaning, like, cost for housekeeping,” Trump’s son Eric said in a Yahoo Finance interview last year.

Well, looks like they’ve fixed all the problems guarding the White House. I mean, seriously? Why don’t they just fire these guys and buy a German Shepherd?

The latest accused White House fence jumper was on the grounds for about 20 minutes before he walked up to the back door of the White House and approached a Secret Service officer and said he had an appointment with the president, two Secret Service sources tell the Washington Examiner.

Even though the Secret Service’s Uniformed Division searched for the intruder after he set off a series of alarms after jumping multiple fences, they only found him when he walked up to the officer posted at the “C-11” position, the back door of the White House’s South Portico that leads into the dignitary reception area, the sources said.

One source said the intruder, identified as Jonathan Tran, walked right up to the back door and startled the officer standing there who didn’t immediately think he was an intruder but some type of contractor because he was wearing khaki pants.

Director Joseph Clancy was hired by President Barack Obama to shore up the agency after a series of high-profile scandals back in 2014. He was the former leader of Obama’s protective detail and had retired into the private sector before being summoned back to the public arena.

House Oversight and Government Reform Committee Chairman Jason Chaffetz on Tuesday thanked Clancy for his service and said he did a good job turning the agency around.

The spouses of several Secret Service agents are circulating a petition calling for the immediate removal of the special agent who wrote on Facebook that she would rather face “jail time” than take “a bullet” for President Trump, the Washington Examiner reported.

The spouses, who requested anonymity out of fear of retribution against their husbands and wives, are speaking out against the special agent in question, Kerry O’Grady, because they say they no longer have faith that she can lead the Denver district office where their spouses work.

The online petition, addressed to Secret Service Director Joseph Clancy, calls for the agency to “act now and terminate [Special Agent in Charge] Kerry O’Grady from the duties she boldly stated she will not perform.”

President Obama chose an insider known to him personally to head the Secret Service, elevating the former head of his security detail and the current acting director, Joseph Clancy, to assume stewardship over the troubled agency.

A panel of experts assembled by the administration itself last year recommended bringing in someone from the outside. No matter, Obama chose someone he is comfortable with.

The president values loyalty. Whether he has put loyalty ahead of competence in this case is unclear. White House Press Secretary Josh Earnest would not even say today that there was a competitive selection process, saying only that it was not a “foregone conclusion” when Obama made Clancy the acting director that he would remain.

Clancy does not have significant managerial experience and he is from within the agency. On the other hand, he has acted boldly in removing senior people who were part of the problem and has impressed some members of Congress. Hopefully, Obama is doing the right thing.

Here they are, the Secret Service agents who take down White House intruders and protect your president, regardless of Party.

The Secret Service tweeted out their photos Thursday. 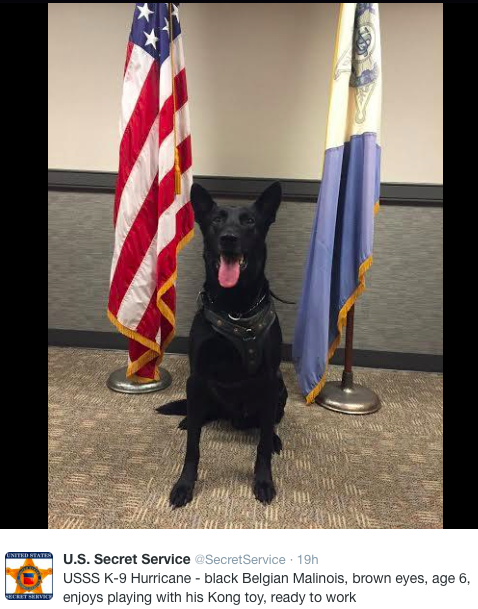 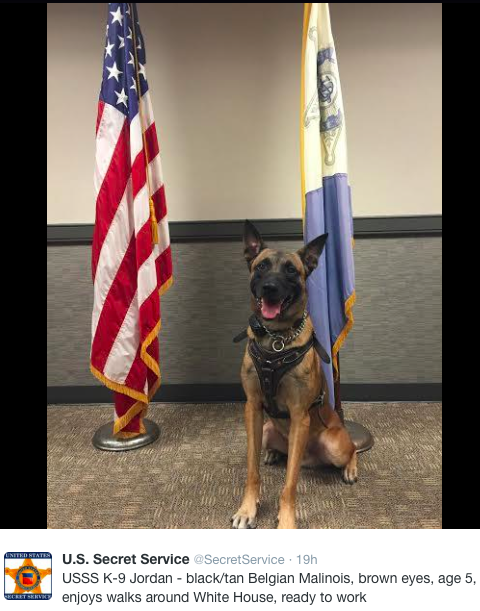 I see them around the grounds. Definitely two of my favorite White House employees.

The members of the Secret Service who brought a horde of prostitutes back to their hotel should and will be punished. For those who are guilty, their careers are over. This is unfortunate but necessary.

These people do have stressful jobs and are frequently sent away from home, and it’s not surprising they wanted to blow off steam. But the way they did it is not only morally reprehensible, it endangered national security and the life of the president. They didn’t know who these women were and whose agenda they might have been serving.

It’s sad, because any one of these men would have given their life for their country and their president. But there is no choice in the matter. Discipline in the U.S. Secret Service must be upheld 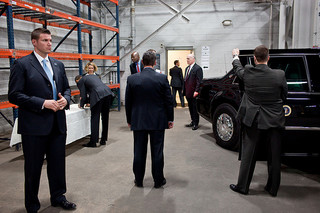 What’s more, the participation of supervisors and veteran agents suggests a deeper problem at the USSS that must be resolved, in all likelihood starting with the firing of its director, Mark Sullivan. I can’t imagine how he stays after this.

But let’s keep some things in perspective.

The Secret Service is a magnificent organization that, as government agencies go, has performed its duties in nothing less than a glorious manner.

Think about it. In more than 30 years, since Ronald Reagan was shot, nobody has really come close to killing a president or a candidate for the presidency. The three decade mark is a record, extending all the way back to Andrew Jackson, who might have been killed in 1835 had his assassin’s gun not misfired.

The Secret Service is the ultimate example of the job that gets people’s attention only when you fail. So let’s applaud 31 years of success at a time the country has had more people living within it than ever and presumably, more lunatics and bad guys than ever eager to do away with our leader.

As someone who has worked at the White House as a reporter for nearly 15 years, I am one of those who has been protected by the Secret Service and who owes their life to their fearless devotion to their work.

Once, about eight or nine years ago, in the nerve racking days following 9/11 and during the early period of the Iraq War, I was working in the basement of the White House when one of the other reporters came running into the room screaming at everyone that the uniformed Secret Service officers who guard the building were all bearing weapons and shouting for us to get out.

As I prepared to leave, I heard a thunderous boom. My first thought was that an airliner had hit the White House, and I looked around to see whether there was already smoke or fire. I thought of my newly born son and my wife. And then, not seeing any signs of an explosion, I proceeded to get out.

I made my way up the stairs and out onto the walkway that leads to the West Wing driveway. 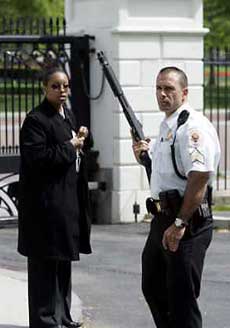 As I emerged from the White House, I saw the uniformed division agents in formation with rifles. They were shouting, “Get out now! Run! Run!”

Who was I to disobey an order?

I started moving quickly down the driveway with other the reporters. All of those Secret Service men and women remained firmly in place. One had a dog on the North Lawn. They weren’t going anywhere. Whatever was about to land on the White House was going to land on them too. Their only concern appeared to be that we get out as fast as possible.

We exited the White House and swiftly made our way about a block away, to the other side Lafayette Park. As we gathered there, news reports were coming in that a small airplane had been detected flying into restricted airspace close to the White House. Jets had quickly been dispatched to intercept it – the source, I presumed, of the sonic boom I had heard as they broke the sound barrier in the rush to engage their target.

The small plane, as it turned out, was mistakenly off course and did not intend any threat to the White House, and we soon returned to our desks.

Memories of the experience may fade, but two parts will always remain with me: The moment I thought I would lose my family forever, and the sight of those Secret Service officers, doing their duty, and awaiting their fate.

I don’t think so.

At least, any confidence he might have is contingent on what we find out.

White House Press Secretary Jay Carney played the artful dodger on the question Tuesday, and apparently none of the White House press corps picked up on it.

We’re back to, “It depends on what the meaning of the words ‘is’ is.”

Carney was asked Tuesday, “Does the President feel that if these allegations are confirmed that the director of the Secret Service, Director Sullivan, should step down?”

The President has confidence in the director of the Secret Service.  Director Sullivan acted quickly in response to this incident and is overseeing an investigation as we speak into the matter.  Beyond that, I’m not going to, as the President did not, speculate about conclusions that the investigation might reach, since it is ongoing.

Notice he talked only about the present tense. The question was about what would happen in the future if the allegations against the agents are confirmed.

So there IS confidence in Director Mark Sullivan.

But if these various charges are true, including a mass importation of prostitutes into the hotel where the Secret Service members were staying – with copies of Obama’s itinerary laying around and the prospect that that these agents could be bribed – I suspect there is something wrong at the United States Secret Service.

I mean, would it really be such an original ploy for a foreign adversary to try to tempt government officials with prostitutes?

A homeless man who has apparently been hanging around the White House jumped the fence yesterday. From CNN: According to the Secret Service, the detained man is James Dirk Crudup, 41, who is homeless. He will be charged with unlawful entry and contempt of court because he previously had been ordered to stay away from… END_OF_DOCUMENT_TOKEN_TO_BE_REPLACED

Thought you might like to listen to to this. It’s the newly released recording of the Secret Service chatter at the time Ronald Reagan was shot on March 30, 2011. The recording opens with an announcement that Reagan is headed out of the Hilton – known around Washington as the “Hinckley Hilton” – and then… END_OF_DOCUMENT_TOKEN_TO_BE_REPLACED