From the pool report this morning:

Arrived Sidwell Lower School 9:01 for younger daughter Sasha’s lower school event. Per Sidwell calendar, today is lower school and middle school’s last day of school, and there is a 4th grade closing ceremony that was to start at 9:00.

The motorcade unexpectedly left the White House at 7:01 am and headed for Sidwell Friends School in Washington, where the Obamas are apparently having a parent-teacher conferences for Sasha and Malia.

Here’s another example of why President Obama should stop bringing his children before the public.

Obama frequently talks about his kids, and they appear in White House approved photos. I’m sure at least part of this is that, as a loving dad, he just sees them as an extension of himself. But since everything he does bears scrutiny, and since they are arguably also being used toward a political end, their profile raises difficult questions about how they should be handled by the media and whether they will be cast in a negative light as part of the public conversation. 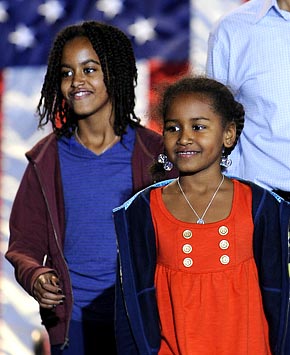 Obama mentioned in his Today Show interview this morning that though they are wonderful students, Sasha and Malia would, like any kids, be happy to spend unlimited time watching TV.

Here’s what Obama gets for putting his kids forward. One Kelly Burnett, a questioner in some kind of studio audience NBC set up, asked the president:

“I wanted to know if you think that Malia and Sasha would get the same kind of education at a DC public school compared to the elite private academy that they’re attending now.”

That’s an implicit put down.

Obama tried to sound like he didn’t mind. “Thanks for the question, Kelly,” he responded, when you know he’d rather have said, “Why don’t you go jump in front of a yellow taxicab, Kelly.”

Obama, with the money he has, would of course be guilty of parental malpractice if he put his kids in the DC public school system instead of an “elite private academy,” – and the more elite the better, by the way.

And Obama answered the question honestly, noting the problems with the DC schools. I like that Obama didn’t even make a show of the idea that he might try to send them to a public school out of a sense of fairness. President Carter of course dumped poor Amy into the DC system.

I don’t remember any critical questions about Chelsea’s education at Washington’s Sidwell Friends School, the same elite academy Sasha and Malia are now attending. That’s because, as a White House reporter covering Clinton, I hardly knew she existed.

And some of their friends. From the pool report.

I gather the guard and the Interior Department didn’t recognize A PRESIDENTIAL MOTORCADE  when he sees it . . .

Actually looks like maybe something inside didn’t seem kosher.

At 10:05 a.m. in a light drizzle, the motorcade rolled for the 2 minute trip to the Interior Department basketball court.  Just before the 14 vehicle package left the White House grounds, a mother and young daughter walked up the driveway toward the presidential SUV.  The young woman appeared to be a contemporary of Sasha Obama.

That was our clue that the basketball outing would include at least one of the President’s daughters.  Moments before the motorcade departed, four young women entered one of the SUVs.  From your pooler’s vantage point, it could not be determined whether one or both of Mr. Obama’s daughters was on the outing.  Pool minder Katie Hogan said she could only confirm that this was a basketball outing involving at least one of the presidential daughters.  Ms. Hogan said she did not know whether the outing involved just one or both of the daughters and if only one, which one.

When the motorcade arrived at the Interior Department, there was a brief, unexplained delay, before the barrier to the underground garage was raised and the presidential SUV and several other Secret Service Vehicles entered.

The pool is now holding in vans outside the Interior Department.