I’ve just published an ebook, “The Obama Scandals: The top 22 outrages of the Obama administration.”

This book includes what you need to know about the biggest Obama administration misdeeds, starting with the recently revealed “unmasking” scandal and including Hillary’s email server, Benghazi, Fast and Furious, the IRS targeting of conservatives, and much more!

Yes, all the Obama abuses of power are here in one book you can use to contradict your liberal friends and family members when they start talking about the corruption of Trump’s campaign or his administration, for which there exists no proof at all!

By purchasing this book, you will not only be helping White House Dossier, but you will possess at your fingertips the evidence that electing leftists who believe the means justifies their “noble” ends leads to egregious corruption.

I hope you will buy a copy, it’s only $4.99. If you are able to rate the book and leave a short review on Amazon, that would help enormously.

Thanks so much. You can get the book on Amazon by clicking this link or on the image below. If you don’t have Kindle, you can download the app from Amazon or the Apple App store. It’s also available on iBooks and will be soon on Barnes and Noble’s Nook. Thanks again. 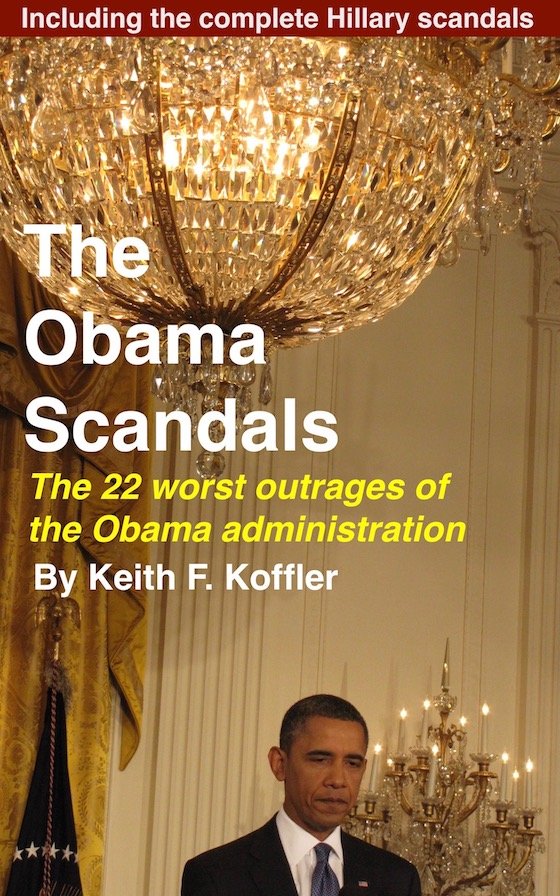 The White House, which admits there is such a thing as terrorism but thinks there is no such thing as “Islamist terrorism,” appears to have edited out audio of French President Hollande using the term at this week’s nuclear summit in Washington.

After MRCTV reported that the White House posted video muting out audio of French Pres. Francoise Hollande and his translator saying the words, “Islamist terrorism,” the White House posted an explanation claiming “a technical issue with the audio during the recording” caused the lost audio – but, then, somehow, posted a link a version of the video without the recording “technical error.”

Here’s some video of the Nixonian deletion. What are the odds there was a “technical glitch for just the moment someone said “Islamist terrorism.” So the White House appears to be guilty of both censorship and lying.

NOTE: To learn more, get The Obama Scandals today.

President Obama claims that Republicans are busy probing “phony scandals.” But the sheer number of scandals suggests that misbehavior, abuse of power, and possibly corruption are not something being dreamed up by the GOP, but a defining characteristic of the Obama administration.

Here is a full list of the administration’s most egregious scandals. The ones we know about, at least. I’ve added four since the last time we ran the list – an increase of 20 percent!

1. IRS targets Obama’s enemies: The IRS targeted conservative and pro-Israel groups prior to the 2012 election. Questions are being raised about why this occurred, who ordered it, whether there was any White House involvement and whether there was an initial effort to hide who knew about the targeting and when.

2. Benghazi: This is actually three scandals in one:

3. Watching the AP: The Justice Department performed a massive cull of Associated Press reporters’ phone records as part of a leak investigation.

4. Rosengate: The Justice Department suggested that Fox News reporter James Rosen is a criminal for reporting about classified information and subsequently monitored his phones and emails.

5. Potential Holder perjury I: Attorney General Eric Holder told Congress he had never been associated with “potential prosecution” of a journalist for perjury when in fact he signed the affidavit that termed Rosen a potential criminal.

6. The ATF “Fast and Furious” scheme: Allowed weapons from the U.S. to “walk” across the border into the hands of Mexican drug dealers. The ATF lost track of hundreds of firearms, many of which were used in crimes, including the December 2010 killing of Border Patrol Agent Brian Terry.

7. Potential Holder Perjury II: Holder told Congress in May 2011 that he had just recently heard about the Fast and Furious gun walking scheme when there is evidence he may have known much earlier.

8. Sebelius demands payment: HHS Secretary Kathleen Sebelius solicited donations from companies HHS might regulate. The money would be used to help her sign up uninsured Americans for ObamaCare.

9. The Pigford scandal: An Agriculture Department effort that started as an attempt to compensate black farmers who had been discriminated against by the agency but evolved into a gravy train delivering several billion dollars in cash to thousands of additional minority and female farmers who probably didn’t face discrimination.

10. GSA gone wild: The General Services Administration in 2010 held an $823,000 training conference in Las Vegas, featuring a clown and a mind readers. Resulted in the resignation of the GSA administrator.

11. Veterans Affairs in Disney World: The agency wasted more than $6 million on two conferences in Orlando. An assistant secretary was fired.

12. Sebelius violates the Hatch Act: A U.S. special counsel determined that Sebelius violated the Hatch Act when she made “extemporaneous partisan remarks” during a speech in her official capacity last year. During the remarks, Sebelius called for the election of the Democratic candidate for governor of North Carolina.

13. Solyndra: Republicans charged the Obama administration funded and promoted its poster boy for green energy despite warning signs the company was headed for bankruptcy. The administration also allegedly pressed Solyndra to delay layoff announcements until after the 2010 midterm elections.

14. AKA Lisa Jackson: Former EPA Administrator Lisa Jackson used the name “Richard Windsor” when corresponding by email with other government officials, drawing charges she was trying to evade scrutiny.

15. The New Black Panthers: The Justice Department was accused of using a racial double standard in failing to pursue a voter intimidation case against Black Panthers who appeared to be menacing voters at a polling place in 2008 in Philadelphia.

16. Waging war all by myself: Obama may have violated the Constitution and both the letter and the spirit of the War Powers Resolution by attacking Libya without Congressional approval.

17. Biden bullies the press: Vice President Biden’s office has repeatedly interfered with coverage, including forcing a reporter to wait in a closet, making a reporter delete photos, and editing pool reports.

18. AKPD not A-OK: The administration paid millions to the former firm of then-White House adviser David Axelrod, AKPD Message and Media, to promote passage of Obamacare. Some questioned whether the firm was hired to help pay Axelrod $2 million AKPD owed him.

20. I’ll pass my own laws: Obama has repeatedly been accused of making end runs around Congress by deciding which laws to enforce, including the decision not to deport illegal immigrants who may have been allowed to stay in the United States had Congress passed the “Dream Act.”

21. The hacking of Sharyl Attkisson’s computer: It’s not clear who hacked the CBS reporter’s computer as she investigated the Benghazi scandal, but the Obama administration and its allies had both the motive and the means to do it.

22. An American Political Prisoner: The sudden decision to arrest Nakoula Basseley Nakoula on unrelated charges after protests in the Arab world over his anti-Muslim video is an extraordinarily suspicious coincidence. “We’re going to go out and we’re going to prosecute the person that made that video,” Hillary Clinton allegedly told the father of one of the ex-SEALs killed in Banghazi.

23. Get rid of inconvenient IGs: Corporation for National and Community Service Inspector General Gerald Walpin was fired in 2009 as he fought wasteful spending and investigated a friend of Obama’s, Sacramento Mayor and former NBA player Kevin Johnson. The White House says Walpin was incompetent.

24. Influence peddling: An investigation is underway of Alejandro Mayorkas, director of the U.S. Citizenship and Immigration Services, who has been nominated by Obama for the number two post at the Department of Homeland Security. Mayorkas may have used his position to unfairly obtain U.S. visas for foreign investors in company run by Hillary Clinton’s brother, Anthony Rodham.

Led by Chairman Darrell Issa (R-Calif.), the House Oversight Committee this afternoon voted Attorney General Eric Holder in contempt of Congress for refusing to hand over documents related to the Fast and Furious gun running operation.

After Republicans defeated several Democratic amendments seeking to water down the contempt resolution, the panel moved through a resolution of contempt on 23-17 Party line vote.

If a deal is not worked out to provide the documents – which President Obama has sealed through a claim of executive privilege – the next step will be a vote of the entire House on the contempt citation.

“You leave me no alternative but to join those that call upon you to resign your office,” Cornyn said during a hearing on Capitol Hill. “The American people deserve better, they deserve an attorney general who is accountable and independent, they deserve and attorney general who puts justice before politics, and it’s my sincere hope that President Obama will replace you with someone who is up to that challenge.”

Before calling on Holder to resign, Cornyn, who runs the National Republican Senatorial Committee – in charge of electing Republicans to the Senate – delivered a full rap sheet of the Republican complaints against Holder. It’s pretty riveting.

Holder replied, “I don’t have any intention of resigning.”

Here’s some earlier questioning of Holder by Cornyn that I thought might interest you.

The House Oversight Committee will vote June 20 on whether to cite Attorney General Eric Holder for contempt of Congress.

Committee Chairman Darrell Issa (R-Calif.), who has been leading the investigation into the administration’s handling of the Fast and Furious gun running operation into Mexico, issued a statement today charging Holder with withholding evidence.

The Obama Administration has not asserted Executive Privilege or any other valid privilege over these materials and it is unacceptable that the Department of Justice refuses to produce them.  These documents pertain to Operation Fast and Furious, the claims of whistleblowers, and why it took the Department nearly a year to retract false denials of reckless tactics.  The Justice Department’s actions have obstructed the investigation. Congress has an obligation to investigate unanswered questions about attempts to smear whistleblowers, failures by Justice Department officials to be truthful and candid with the congressional investigation, and the reasons for the significant delay in acknowledging reckless conduct in Operation Fast and Furious.

The House Republican leadership, which has appeared wary of charging Holder with contempt during an election year, now appears to have gotten behind Issa. Speaker Boehner issued a supportive statement and suggested he would bring the citation to the floor if the committee passes it.

Either the Justice Department turns over the information requested, or Congress will have no choice but to move forward with holding the Attorney General in contempt for obstructing an ongoing investigation.

Boehner has increasingly been showing backbone this year, threatening just a few weeks ago not to increase the debt ceiling without commensurate spending cuts.

Oops. Bumped into a couple of other cars over the weekend. Can’t leave the scene of an accident, even if you’re the Secretary of Commerce.

From the Los Angeles Times:

Bryson was driving a Lexus in the 400 block of South San Gabriel Boulevard shortly after 5 p.m. Saturday, when he allegedly rear-ended a Buick as it was waiting for a train to pass, according to a statement released by the L.A. County Sheriff’s Department and the San Gabriel Police Department.

After briefly stopping to talk to the three men inside the Buick, Bryson left the location in the Lexus and then struck the Buick a second time, authorities said. The men followed Bryson’s car and called 911 to ask for police assistance.

Bryson continued to drive his Lexus into Rosemead, which is patrolled by the Los Angeles County Sheriff’s Department. There, he allegedly crashed into a second vehicle near the intersection of San Gabriel Boulevard and Hellman Avenue.

There authorities found him alone and unconscious behind the wheel of his car.

Well, looks like we’ll be having a new Secretary of Commerce. Anyway, there isn’t much commerce going on, so maybe we can skip it.

UPDATE: Commerce says Bryson suffered a seizure, according to Politico.