This year’s total is about 28 more outings than he averaged annually during his first term, when the pressure must have really been on an inexperienced new president facing the worst economic crisis since the Great Depression.

He played only 19 times during 2012, when he was juggling the presidency and a reelection campaign. Somehow, he made it through with minimal attention to his “relaxation” needs.

The fact is that Obama is now safely reelected and feels more secure messing around on the golf course than he did when he had to face voters. Sure, it may relax him, but he clearly plays because he likes it and is unconcerned about it looks for a the self-proclaimed battler for income equality to be striding lush greens, even as millions have suffered under his lackluster economy.

Critics have noted that he seems more and more uninterested in his job, paying even less attention than he had before. This seems to be reflected in the number of excursions, which clock in at about four to five hours, he is taking to the fairways.

And, methinks he smokes on the golf course, with his friends and low-level staffers sworn to silence. Really, that’s just a guess. But it might explain some of the obsession.

On Janaury 2, before departing Hawaii, he got in one more round, the ninth of his vacation and his first of 2015, bringing his total rounds as president to 214.

President Obama and his family returned to the White House late this morning from their 17-day vacation to Hawaii. The Obamas departed Hawaii Saturday night.

During the flight home, Obama stopped by the press cabin for a chat, but the conversation was off the record.

President Obama vowed to make reducing income inequality the focus of the final years of his presidency. But first, dinner.

Obama and his wife Michelle ate last night at one of the most exclusive restaurants in the country, Honolulu’s Vintage Cave. The place reportedly features a $295 tasting menu, which means once you start adding in wine, tax, and tip, you’re headed toward a meal for two costing $1,000.

The joint, according to the restaurant’s website, is a feast for the body and the soul.

Something all of humanity shares in common is the cave. It occupies a special place in the heart and mind that connects with the soul . . . however advanced we become, there always lurks in the deep recesses of our hearts a yearning to return to the basics of our ancestral origins.

Vintage Cave Honolulu brings that secret longing to life. Its walls and ceilings are masoned with 150,000 antique style bricks. Its flooring is of granite quarried in the mountains of India. Furniture and fixtures were all custom crafted to create unique and comfortable cavern echoing the underground architecture of ancient Rome.

Well now that’s not quite true. The vast majority of our ancestors did not live in caves. Just because some effete French paleo drew some pictures on a stalactite doesn’t mean the rest of us lived there too.

Maybe they can place their next restaurant in a tree, which in fact we did come from. When they branch out, so to speak.

Here’s a portion of the Cave: 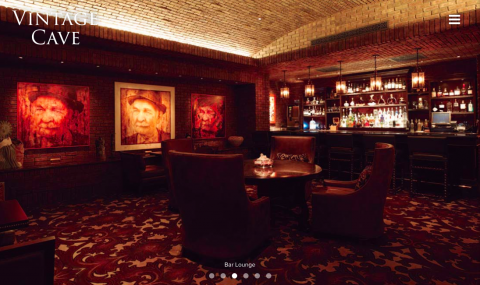 Anyway, I don’t know about you, but I’m not longing, generally speaking, to “return” to a cave, whether I came from there or not. Though I wouldn’t mind spending time in this particular cave.

According to Honolulu’s Pacific Business News:

Art valued at hundreds of millions of dollars, by artists such Pablo Picasso and Mordecai Ardon, line walls made of bricks that were specially made for the restaurant and laid by 10 bricklayers flown in from Yugoslavia.

The wine cellar holds bottles that are worth thousands of dollars — the most expensive one is a 2009 Grand Cru Moaopole that costs $16,000 A shot of 50-year-old Macallan single-malt Scotch from the members-only bar costs $6,000. The restaurant has a “private society” member roster of around 550 clientele who have paid either $50,000 or $500,000 to dine at the restaurant . . .  The clients use the credit toward food and drink.

A sample of the tasting menu from a customer on Yelp who partook of the Vintage Cave experience.

So, yeah, the Obamas are wealthy people, and if they want to go to this restaurant they have every right to. But when your politics are based in class warfare and you term income inequality “the defining challenge of our time,” it sure does reek of hypocrisy to drop $1,000 on a meal during your 17-day Hawaii vacation.

But the term “limousine liberal” is hardly something new.

President Obama apparently will not be making any kind of statement out of Hawaii today about the murder of two police officers in Brooklyn by a man who appears to have been acting in revenge for the deaths of Eric Garner and Michael Brown at the hands of police.

The White House put out word that “a lid” had been called, meaning Obama, who went golfing earlier in the day, is not scheduled to be heard from again.

They could of course change their minds, but that’s the current status.

President Obama and his family will travel to Hawaii Friday to begin their annual pilgrimage to paradise, a departure the president is “eagerly looking forward to,” according to White House Press Secretary Josh Earnest.

No word on how long they are staying, though they are almost certain to remain in the Aloha State though New Year’s.