The middle class was not invited.

I realize the Obamas are wealthy people, and that wealthy people have the right to drop $260 of their disposable income on chow. But if you’re going to invite Associated Press photographers along to capture your trip to Target and stage photo ops at PetSmart and Best Buy, then I’m going to write about your unpublicized excursion to Alan Wong’s.

The press pool was not invited in to take photos this time. In fact, others were discouraged from doing so too. From the pool report:

Diners have been trying to takes pictures of POTUS, only to be chased off by advance staffers.

Since when are people not allowed to take pictures?

According to the pool report, the Obamas and their friends dined on the five-course “tasting menu” that was tasty to the tune of $75 a person, $105 with wine. Among the highlights were “Sassey Salad” and bacon wrapped pork loin. 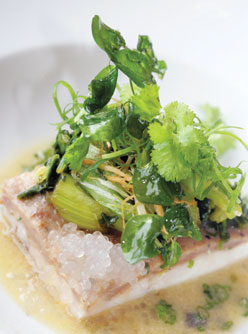 Not counting gas. For a motorcade.