The U.S. press and the White House were virtually silent on perhaps the most important and ominous event in Latin America this year, the election this month of Socialist Ollanta Humalla to be president of Peru.

Ollanta’s rise to power is the latest shadow cast by the darkening cloud over the region covered by the Monroe Doctrine, as country after country begins to fall to anti-Democratic leftists who threaten to finish the job the Soviet Union failed to complete.

Peru, Bolivia, Venezuela, Ecuador, and Nicaragua all have elected populist leftists whose commitment to democracy is suspect. 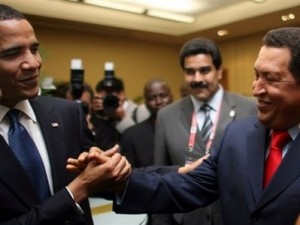 There’s no evidence that President Obama is giving this much thought. And what thought he has given it is not good.

The president has slow walked trade deals with two of our Latin allies, Panama and Colombia, through Congress. Both deals were negotiated by George W. Bush. Colombia is surrounded by enemies and could use the economic help a trade deal with the United States would give it.

The most prominent Latin American policy of the Obama administration was its reflexive support in 2009 of ousted left wing Honduran President Manuel Zelaya, over the wishes of the Hondurans.

After the Honduran Congress legally removed Zelaya from power for illegally trying to change the Constitution to keep himself in power, the Obama administration was in an uproar.

The White House insisted that Zelaya be returned to his office. But cooler heads eventually prevailed, and the administration decided to leave things up to the Hondurans. Zelaya now lives in exile in the Dominican Republic.

Wall Street Journal Latin America columnist May Anastasia O’Grady writes that Peru’s Humala has remade his image from that of a leftist revolutionary to a progressive Democrat. How many times have we seen that?

He is an ex-army officer who has built his political career by tapping into the resentment of the disenfranchised with demagogic speeches against liberal economics and threats of violence against the establishment. Mr. Humala even attempted his own military coup in 2000, and there are credible allegations that he took money from Mr. Chávez in his 2006 presidential bid.

Last week he tried to distance himself from this past by publicly swearing on a Bible to refrain from dismantling the country’s democratic institutions if elected. His critics howled that it was pure theater and no more believable than the recent rewrite of his policy agenda. The old one, dated December 2010, was a 198-page anti-market, national-socialist rant. The new one is eight pages of promises to “combat corruption,” “reestablish public ethics,” and lay down the rule of law. It is as if Mr. Humala was knocked off his horse on the road from Puno.

It’s hard to imagine that Obama wasn’t one of your average liberal college campus early-1980s supporters of the Sandinistas and the rebels in El Salvador.

His outreach to Venezuelan President Hugo Chavez at the beginning of his administration is redolent of the type of naivete that U.S. liberals whose thinking was whelped in the 1960s, 70s and 80s harbor toward autocratic Latino leftists. The reaction by Obama to the 2009 events in Honduras also descends from a “How bad could the Sandinistas be?” mindset, as does their relative silence on Peru.

The United States will probably continue to support Colombia’s fight against Chavez’s pals running the terrorist FARC organization, which is seeking to take over Colombia. But when it comes to Obama countering leftists who try to extinguish democracy or supporting candidates who are running against pseudo-democrats, my Eight Ball says, “Outlook not so good.”