What happened to all the talk about the Logan Act, now that Democrats are conducting foreign policy as private citizens?

From the Logan Act:

Trump officials were threatened with the act, which is never enforced, for actions taken after the election but before the inauguration. But they were the incoming administration. It would be foolish of them not to have some contact with foreign leaders. Kerry is the administration that just left power. There’s a big difference. Evidently, he thinks he is still secretary of state.

Kerry admits he’s been engaging in chats with Iranian Foreign Minister Javad Zarif in which Kerry appears to be trying to extract good behavior from the Iranians in order to mitigate the case for President Trump’s moves to scuttle the Iran nuclear deal. Other countries that are party to the deal so far have not gone along with Trump.

Kerry admitted in an interview this week that he is conducting foreign policy:

What I have done is tried to elicit from him what Iran might be willing to do in order to change the dynamic in the Middle East for the better. You know, how does one resolve Yemen? What do you do to try to get peace in Syria? I mean, those are the things that really are preoccupying, because those are the impediments to people, to Iran’s ability to convince people that it’s ready to embrace something different. I mean, and I’ve been very blunt to Foreign Minister Zarif, and told him look, you guys need to recognize that the world does not appreciate what’s happening with missiles, what’s happening with Hezbollah, what’s happening with Yemen. You’re supporting you know, an ongoing struggle there They say they’re prepared to negotiate and to resolve these issues.

“It’s inconsistent with what the foreign policy of the United States is, as directed by this president, and it’s beyond inappropriate,” Pompeo said during an appearance at the State Department. “I’ll leave the legal determinations to others, but what Secretary Kerry has done is unseemly and unprecedented.”

John Kerry was a disastrous secretary of state who gave us the ruinous Iran deal, did nothing about North Korea, and now is interfering with President Trump’s foreign policy by illegally conducting his own.

Kerry has been meeting with foreign leaders, including the Iranians, in an attempt to save his precious, painstakingly negotiated handiwork.

John Kerry can’t get over the fact that he had his chance and blew it! Stay away from negotiations John, you are hurting your country!

As usual, Trump has homed right in on his enemy’s weakness. Kerry no doubt can’t get over the fact that he never became president. So he had to do “big things” as secretary of state. He tried to resolve the Israeli-Palestinian conflict, and when that failed, he struck a grand bargain with the ayatollahs that essentially just delays recognition of their nuclear program.

I think Trump should confront Iran, but I think he should wait until he has settled things with North Korea, as I wrote here. But John Kerry needs to spend more time sail surfing and less time adding to the damage he has done to this country.

I mean, the guy can’t even figure out whether to give a hug or a handshake. 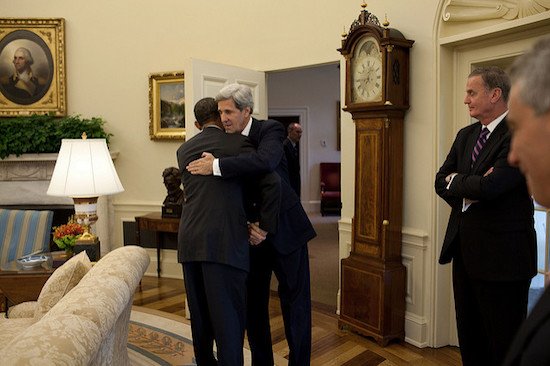 And why not? Everybody else running was born during the Civil War.

Obviously, he doesn’t recognize the central problem with his potential candidacy. Specifically, that no one will vote for him.

“Like the resolution that John Kerry advanced at the UN (Security Council), John Kerry gave a skewed speech against Israel. For over an hour, Kerry dealt obsessively with the settlements and almost didn’t touch on the root of the conflict — the Palestinian opposition to a Jewish state in any boundaries,” a statement from the Prime Minister’s Office read.

Secretary of State John Kerry suggested Wednesday that the United States had at least indirect input into the United Nations resolution condemning Jewish settlements, pushing for it to be crafted in a way that would not cause the United States to reject it.

Israeli officials have accused the Obama administration of playing a role in the resolution.

Read the rest at the Washington Examiner.

Secretary of State John Kerry now has decided, instead of stonewalling, to get to the bottom of who deleted a whole portion of a State Department briefing video that included former spokeswoman Jen Psaki implicitly acknowledging that the State Department lies about stuff.

“The Secretary said he wants to dive deeper into this, look more into what happened, and try to get to the bottom of what happened,” said a State Department spokesman, who last week said the investigation had come to “a dead end.”

Here’s a pretty good summary of the whole mess from a few days ago that gives an idea of why Kerry relented.

You see, this isn’t a gaffe. This is how they think. Kerry, President Obama – they believe Muslims have a gripe when they complain about free speech, and that these murderers, while not justified in their actions, aren’t necessarily lunatics looking for reasons to kill Westerners and destroy our way of life.

Secretary of State John Kerry Tuesday acknowledged to House members that if they vote down the Iran deal – and override a presidential veto – that the deal would collapse.

According to the Washington Exanminer:

“It’s physically impossible” for the deal to continue because of the bar to waiving U.S. sanctions, Kerry said.

“There’s no way for the deal to work because our lifting of sanctions is critical to the ability of other countries to invest and work and critical obviously for Iran to get any money,” he added.

However, he seemed to hedge when asked if the administration would follow the law:

Earlier, Kerry was asked by Rep. Brad Sherman, D-Calif., if he would obey the will of Congress if a disapproval resolution was enacted.

His response: “I can’t begin to answer that at this point without consulting with the president.”

Well, you should at least be able to begin answering whether you would follow the law . . .

Secretary of State John Kerry this morning dived straight into the land of Catch-22, claiming that an Israeli attack on Iran would give the Iranians cause to justify their pursuit of nuclear weapons in the first place. “Iran would then have a reason to say, ‘Well, this is why we need a bomb,’” Kerry told… END_OF_DOCUMENT_TOKEN_TO_BE_REPLACED

I don’t know – how does he think he can get away with saying something that simply isn’t true? I guess because they get away with such things all the time. The administration keep claiming it wasn’t trying to dismantle Iran’s nuclear program. But officials, including President Obama, repeatedly said and suggested that’s exactly what they wanted. Here’s some… END_OF_DOCUMENT_TOKEN_TO_BE_REPLACED

Drunk on painkillers, Secretary of State John Kerry will leap from his hospital bed sometime this month and head to Europe to negotiate the end of Western civilization by handing a nuclear weapon to medieval lunatics. It will be a miraculous cure, given that he’s been in the hospital for a broken leg for more… END_OF_DOCUMENT_TOKEN_TO_BE_REPLACED

As people increasingly wondered about the silence, Secretary of State kerry finally tweeted out a photo of himself in the hospital, saying: “Feeling good a week after surgery. Good chats today w/@AmbassadorRice & @StateDept senior team. The work continues!” All of which begs the question, why is Kerry still in the hospital? A week is… END_OF_DOCUMENT_TOKEN_TO_BE_REPLACED