The man was elected president 43 years ago. And he’s building houses.

I hope the houses are less likely to fall apart than the world was after his presidency.

Here’s an email I just got from Jimmah:

Allow me to be blunt:

I’m asking for $1 before the final federal fundraising deadline in 24 hours to elect a Democratic House.

I’ve watched in shock these past few weeks as this Administration shamelessly degraded the dignity of our nation’s highest court and intentionally belittled women.

I cannot stand idly by as Republicans dismantle decades of important progress — and neither should you.

All Democrats must band together to win a House that will stop them and protect us.

God save us. Will we ever be rid of Jimmy Carter? No, I don’t want him to die. I just want him to go back to picking peanuts and not interfering to do more damage than he did during hsi presidency. Like when he neogitaited a “deal” with North Korea on his own when Bill Clinton, supposedly, was about to take care of the problem militarily a quarter century ago.

Think of it. The man was elected president 42 years ago and he’s still going. He was elected during the disco era. Six years after the Beatles broke up. And I think, twelve years after Moses descended from Mount Sinai with the tablets.

Please, someone make it stop. Jimmah asking should be incentive to TAKE money from the Democrats.

I dunno. I’m not only not a theologian, but I’m Jewish, so I have no authority to speak on this. I probably shouldn’t even comment on what Moses would think, although I have a hunch.

One thing I can say for certain is that Jimmah looks and sounds pretty good for 93. Think of it. The man was elected president 42 years ago, and he’s still going strong.

Some of you may remember little Amy Carter. She’s 50.

There are certain bottom lines to U.S. foreign policy that cannot be altered or avoided. One is that a North Korean regime with nuclear weapons that can hit the United States is an intolerable, existential threat that must be prevented at any cost.

Vice President Mike Pence Monday travelled to the DMZ, the no man’s land that separates North and South Korea, to warn North Korea against continuing with its nuclear weapons program.

“Just in the past two weeks, the world witnessed the strength and resolve of our new president in actions taken in Syria and Afghanistan,” Pence said. “North Korea would do well not to test his resolve or the strength of the armed forces of the United States in this region.” 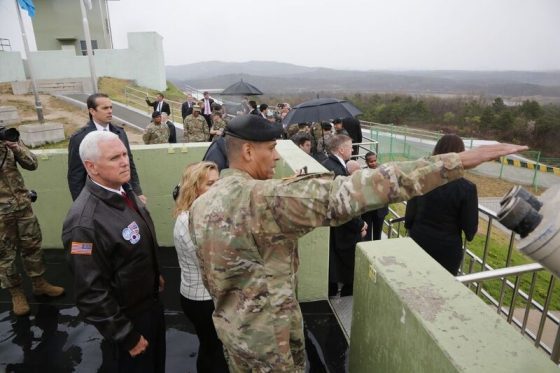 A war on the Korean peninsula would be a horrifying catastrophe. Tens of thousands, or more, would die. But a nuclear weapon landing in Cleveland — or Washington, for that matter — would be far worse.

Okay, I know some of you wouldn’t mind a nuclear weapon landing on Washington, but you know what I mean.

This is the situation that Bill Clinton, a careless, irresponsible president, left us in when, instead of aborting North Korea’s nascent nuclear program, he caved into another catastrophic Democratic president, Jimmy Carter, who undermined Clinton by negotiating his own deal with the North. George W. Bush, his hands full fighting terrorism, didn’t do much to correct things, and Barack Obama, another careless and irresponsible Democratic president, let the problem fester and then left it to his successor to deal with it.

Trump, I believe, will deal with it. Because he’s familiar with bottom lines, and he knows that keeping a first-strike capability out of the hands of Kim Jong-Un is one of them.

“We are now violating about ten of the 30 paragraphs in the Universal Declaration of Human Rights,” Carter said.

See? This is why we don’t elect liberals president.

When you’re good, certain things tend to fall into place. And then you attract some luck to make you even better.

The saying occurs to me as we behold the kaleidoscope of President Obama’s foreign policy failures.

He has, since nearly Day One, presented to the jackals that roam the world a stance of weakness: an over-solicitousness of our enemies; trust doled out to the untrustworthy; hesitancy to act; mixed and changing signals; headlong retreat to the exits from out military engagements; and half-hearted measures taken from a position of leading behind.

And Obama, not being good, has incurred bad and dangerous consequences. Which seem to be driving him away and making him worse.

Around the world, like predators sensing a weakness in the herd, our enemies are growing bolder. The respect the United States holds is no greater than it was under Jimmy Carter.

As Dan Henninger writes today in the Wall Street Journal, there were a series of events last week highlighting U.S. weakness and the Jimmy “Carterization” of Obama – that didn’t get the headlines of the more obvious ones in Eastern Europe:

The consequences of Mr. Obama’s Carterization overseas are coming so fast it’s hard to keep track. Ukraine, though important, is the tip of the iceberg. Here’s what else happened in the week Mr. Putin captured Crimea.

Israel on Wednesday intercepted in the Red Sea an Iranian shipment to Gaza of dozens of Syrian-made surface-to-surface rockets. These are our new Iranian negotiating partners.

North Korea last Thursday test-fired four short-range ballistic missiles and another this Monday. Then on Tuesday it deployed a new multiple-rocket launcher that fired four missiles with enough range to hit American and South Korean military bases near Seoul.

In Moscow last Wednesday,Defense Minister Sergei Shoigu said Russia plans to use military bases in Cuba, Venezuela and Nicaragua for its navy and to refuel strategic bombers. Three months ago, Secretary Kerry ostentatiously announced in a Washington speech, “The era of the Monroe Doctrine is over.” Naturally the Russians took this as a green light to return to one of the Soviet Union’s favorite playpens. The next day, a Russian spy ship, the Viktor Leonov SSV-175, slipped unannounced into Havana Harbor.

Then this Wednesday, a news bulletin: “China announces 12.2% increase in military budget.” That boost comes within 24 hours of the Obama budget proposing a decline in U.S. defense spending.

This is all in one week!

Not only is Obama lacking the iron needed to intimidate our enemies into not messing with us, he lacks the interest.

Where’s his head at? Well, yesterday he went on a fundraising spree, and he was slated to go on vacation tomorrow, again, though this may have to be cancelled.

I get that Obama is not suited to deal with these issues. But at least, he could try. Carter, for all his faults, was tireless, and seemed to really care.

This is bad. Jimmy Carter is reportedly going to North Korea to try to free an American citizen being held there.

You see, here’s the problem. Jimmy Carter is like 107 years old and has no idea what he’s doing. I mean, he’s in pretty good possession of his faculties, but he has never known what he’s doing when it comes to foreign policy or anything else that doesn’t involve constructing cheap housing by hand in low income neighborhoods.

So he’s going to negotiate with the North Koreans to release someone named Kenneth Bae, who supposedly went into the country as a missionary and found out too late that the tyrants who run the place really aren’t into that sort of thing. And so instead of converting the Godless he wound up as a pawn of international diplomacy.

I feel for Kenneth and I think we should be making efforts to get him released. But really, he should have thought this through a little better.

Now, the North Koreans see Carter, and they think, Ahh, here comes Obama. Because, even though the White House emphasized that this is a “private trip,” the North Koreans won’t think it is because they assume that Jimmy is still part of the government in some fashion because where they live, nobody leaves senior government service with his head still connected to his thorax.

Heck, I’m not even sure Carter isn’t up to something on behalf of the White House, given the haphazard way this administration conducts foreign policy.

And so, Carter will start negotiating, and all of a sudden the North Koreans will put something significant on the table, and Carter will call the White House, and they’ll be like, “Oh no, what do we do now?”

And all of a sudden Jimmy Carter will be negotiating nuclear proliferation issues AND THAT’S LIABLE TO END US UP IN A BIG WORLD OF HURT.

Because he doesn’t know what he’s doing.

Well, it looks like the Obama family will have at least several more months of knowing the light will go on when they flip a switch.

According to the Associated Press, the White House has failed to put solar panels on the roof by spring, as promised.

Apollo, the Greek God of the Sun, was furious, and caused all Greek gyro restaurant owners in the United States to start charging 50 cents for extra tzatziki.

Jimmy Carter, who originally installed solar panels only to see them removed by Ronald Reagan was equally angry and threatened to go negotiate a new peace treaty with North Korea.

Enivros were also unhappy, according to the AP report.

McKibben and other environmentalists say the failure to meet its own deadline reflects an administration that’s been long on green rhetoric but sometimes disappointingly short on practical accomplishments.

“Nine months is a pretty long time. You can have a baby in that time,” he said. “On the list of things that get done, this isn’t all that hard. It doesn’t require SEAL Team 6. It just requires a good-faith effort. You can just open the Yellow Pages and get page after page of solar installers.”

Mrs. Obama, you’ve had two babies, and no solar panels? What’s wrong with you? At least put the damn things up to get Mr. McKibben out of your hair.

H/T to Ed Driscoll.com, where I first saw this. Ed notes that  the failure at least makes it “unnecessary for the next Republican president to symbolically remove the panels.”

Obama’s quest to look as much like Jimmy Carter as possible is picking up steam with the decision by the current president to install solar panels on the roof  of the White House to heat the water and provide a little electricity too. Obama image-meisters thought long and hard before agreeing to environmentalists’ demands the… END_OF_DOCUMENT_TOKEN_TO_BE_REPLACED