In the aftermath of President-elect Trump’s victory and recent chatter that Vice President Biden could launch a 2020 campaign for the Democratic nomination, the Nevada Democrat remarked that the field of prospective candidates in four year’s time looks like an “old folks home.” The soon-to-be former senator was referring to Biden, Vermont Sen. Bernie Sanders and Massachusetts Sen. Elizabeth Warren, all of whom could launch campaigns.

“It depends on who’s running,” Reid told an aide while preparing for his final press conference at the Capitol in early December. “It appears we’re going to have an old-folks’ home. We’ve got [Elizabeth] Warren; she’ll be 71. Biden will be 78. Bernie [Sanders] will be 79.”

Read the rest of the piece at the Washington Examiner.

Reid has always been a little unhinged, but now that he’s retiring, he’s freed to go totally off the wall.

Harry doesn’t like President Obama’s Pacific trade deal. It’s amazing to me that Obama likes it. But, to his credit, he does.

I like how Schumer chimes in with the over-used “tell us how you really feel.” Such a clever individual.

I’m sorry about Reid’s eye injury, but at least he gets to walk around looking like a dude all day.

That was Harry Reid’s response to charges that he lied about Mitt Romney of not paying taxes and that his attacks on the Koch brothers were McCarthyite.

It’s always the same with the Left. The ends justify the means. Because the ends are so pretty.

Did Harry Reid get on your nerves? Well soon you’ll have Chuck Schumer under your skin.

Retiring Senate Minority Leader Reid has designated New York Sen. Schumer, number 3 in the Democratic leadership, as his successor, and the number 2, Sen. Dick Durbin of Illinois, has agreed to back off, according to Politico.

Schumer is viewed by Democrats as a consummate tactician and an aggressive spokesman for the cause. He is unlikely to be seriously challenged, though a possible wrinkle is his support for Wall Street, which is anathema to the Elizabeth Warren wing of the party. She, though, has indicated she will not run for leader.

But don’t worry. Reid is not stepping down until he leaves the Senate in January 2017.

Or do worry. It’s worth noting, unlike Reid, Schumer does have his moments of lucidity.

As you may be aware, there are some suspicions being raised about Senate Minority Leader Harry Reid’s “accident” in which he broke his face and fractured some spare ribs.

Reid claimed that a rubber exercise band he was using suddenly broke and graduated into a giant sling shot, hurling him like a human projectile into a cabinet. This, naturally, sounded suspect, especially given that he was injured January 1. Some wondered whether maybe in fact Harry had gulped down a few too many Manhattans while welcoming in 2015 and fallen down the stairs.

The story, it turns out, is much more sordid and upsetting. Harry’s injuries were in fact the result of an attempted coup d’etat by his Senate second in command, Senate Minority Whip Dick Durbin of Illinois.

The awful moment was captured on video obtained exclusively by White House Dossier. In the footage below, Durbin can be seen on the right. Reid is the figure strolling innocently on the left.

The result, as you can see was quite nasty. Reid is even tougher to look at than he was before the injury. 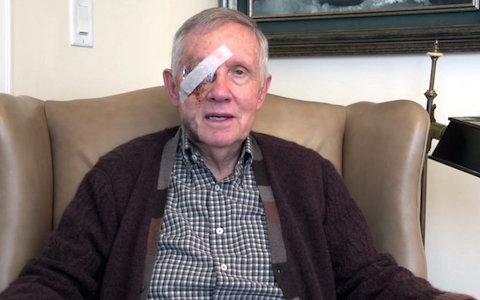 Here’s a nice compendium of some of the stupid stuff Harry Reid has said in recent days and years. His remarks about Asians last week, somehow missed by much of the news media, are just the one of Reid’s many journeys into incomprehensibility.

With Biden inhabiting the Office of the Vice President, the question is begged about whether liberals with early-stage senility are running the country.

Now, are senile liberals much worse than fully sentient ones? No, of course not, because they might accidentally do something conservative.

But what if they start playing with the launch codes while hanging out with Obama in the Oval? I mean, there are consequences to putting people who can’t think straight in positions of power.

The border between the U.S. and Mexico.

What? No, this isn’t one of my satire pieces. He said it. Have a look for yourself.

The Democrats’ McCarthyite obsession with the Koch brothers is one of the most contemptible features of he political landscape plowed by President Obama, who established the practice early on in his administration of the government going after private citizens. You’ll remember that at the outset of this presidency, the White House went directly after Fox… END_OF_DOCUMENT_TOKEN_TO_BE_REPLACED

Where do our most powerful politicians get off attacking specific private citizens engaged in lawful conduct? Reid is continuing his personal assault on the conservative Koch brothers, calling them “oil barons” today. He recently described them as liars. For Democrats, surely, “oil barons” is worse. I suppose this was from the all-night Democrat effusion of… END_OF_DOCUMENT_TOKEN_TO_BE_REPLACED

Does this guy have any shame? A bit of it? Senate Majority Leader Harry Reid today suggested Republican opposition to Debo Adegbile, President Obama’s nominee to lead the Justice Department civil rights division, was race based, indicating they opposed Adegbile because he is “an expert in civil rights” – and they want to deny civil rights: I… END_OF_DOCUMENT_TOKEN_TO_BE_REPLACED

Senate Majority Leader Harry Reid says everything you are hearing about Obamacare’s destructive effect on the lives of Americans is wrong. Everything. “There’s plenty of horror stories being told,” he intoned on the Senate floor today. “All of them are untrue.” The lies, according to Reid, are being paid for by the wealthy, conservative Koch… END_OF_DOCUMENT_TOKEN_TO_BE_REPLACED