After promising to confiscate military-style semi-automatic rifles like our AR-15s, Thursday night he continued to reveal the left’s true colors with a vow to deny funding for religious institutions that oppose same sex marriage.

How about religious institutions that oppose atheism? I mean, isn’t that discriminatory?

Beto is a one-man GOP Get Out the Vote machine.

QUESTION: Do you think religious institutions like colleges, churches, charities, should they lose their tax exempt status if they oppose same sex marriage?”

BETO: Yes . . . There can be no reward, no benefit, no tax break for anyone or any institution, any organization in America, that denies the full human rights and the full civil rights of every single one of us. So as president, we’re going to make that a priority, and we are going to stop those who are infringing upon the human rights of our fellow Americans.”

President Trump’s administration notified the Supreme Court on Wednesday that it would withdraw guidance regarding transgender students at issue in a hot-button Supreme Court case, the Washington Examiner reported.

The letter from Deputy Solicitor General Edwin Kneedler said the Justice and Education Departments removed an Obama administration directive regarding how schools should deal with transgender students’ bathroom usage.

The Obama administration’s guidance called on public schools nationwide to allow transgender students to choose the bathroom facility according to their self-professed gender identity and threatened to block federal funding from schools that didn’t comply.

Under Trump’s guidance, states will now be able to individually interpret whether the protections under the Education Amendments Act’s Title IX apply to transgender students.

Why are some conservative still sneering at this president, who is doing everything they wanted and has the guts and backbone to stand by it, no matter the political correctness police.

Justice Department officials plan to issue new guidance on protections for transgender students that will effectively reverse Obama-era recommendations and ensure those issues are decided at the state level going forward.

The Supreme Court is slated to hear oral arguments late next month on a case involving a transgender teen from Virginia who sued the local school board for the right to use the men’s bathroom on campus despite being born a female. The debate over transgender “bathroom bills” gained increasing attention late last year after the Obama administration sent guidance to public schools saying they should allow transgender students to use whichever bathroom matches their gender identity.

“The president has maintained for a long time that this is a state’s right issue and not one for the federal government,” Spicer said when asked for Trump’s position on the hot-button issue. “So while there will be further guidance coming out this, I think that all you need to do is look at what the president’s view has been for a long time.”

The White House videotaped the rainbow as it descended the night of Friday’s Supreme Court gay marriage decision.

What I’m wondering is, how were they so sure? By their comments before these decisions are announced, it seems to me they know what’s coming, because they appear to be trying to influence the justices, either to change their vote – which John Roberts seems to have done during the first case involving Obamacare, as Obama menaced the Court – or to try to make sure they don’t change their votes.

My guess is that Elena Kagan, who is close to many people around the president and in fact served in the White House herself under Bill Clinton, rings someone up to make sure the White House is aware of what’s up.

But that’s just a guess. And I don’t think it would be against the law, although it would probably a breach of protocol. But protocol is a very quaint notion for this White House and its allies.

The White House Friday evening was lit up in rainbow, the symbol of the gay rights movement. 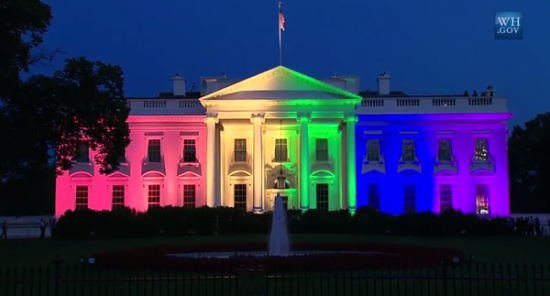 Addressing a heckler the other day, President Obama complained that he was being interrupted in “my house.” It is not his house. It is the people’s house. All the people. And it should not be used as a billboard for his agenda.

Obama has every right to his opinion on this matter. But for many people, the Supreme Court’s legalization of gay marriage is deeply traumatic. His decision, as president of everyone, to rub this Court ruling in their faces is simply despicable.

In an emotional statement from the Rose Garden, President Obama Friday said the 5-4 Supreme Court decision ratifying gay marriage was borne of the principles undergirding the founding of our country.

Our nation was founded on a bedrock principle that we are all created equal. The project of each generation is to bridge the meaning of those founding words with the realities of changing times — a never-ending quest to ensure those words ring true for every single American . . .  today we can say — in no uncertain terms — that we’ve made our union a little more perfect.

Such ringing language comes from a president who until just a few years ago himself supposedly opposed gay marriage, though everyone knew that was just to get elected president.

Perhaps somewhat defensively, Obama recited a list of his actions on gay rights, including refusing to defend the “discriminatory” Defense of Marriage Act and ending “Don’t Ask Don’t Tell, which were policies of Bill Clinton.

“I know change for many of our LGBT brothers and sisters must have seemed so slow for so long,” he said, not acknowledging his own slowness to publicly endorse gay marriage. “But compared to so many other issues, America’s shift has been so quick.”

Progress on this journey often comes in small increments. Sometimes two steps forward, one step back, propelled by the persistent effort of dedicated citizens. And then sometimes there are days like this, when that slow, steady effort is rewarded with justice that arrives like a thunderbolt.

Obama acknowledged that some may oppose gay marriage based on “sincere” beliefs, and that those who held them were “Americans of goodwill.” But that seems hardly consistent with his casting of the issue as a moral and Constitutional imperative. What’s more, he called on advocates to “reach back” and help them change their minds:

I know that Americans of goodwill continue to hold a wide range of views on this issue. Opposition in some cases has been based on sincere and deeply held beliefs.  All of us who welcome today’s news should be mindful of that fact; recognize different viewpoints; revere our deep commitment to religious freedom.

But today should also give us hope that on the many issues with which we grapple, often painfully, real change is possible. Shifts in hearts and minds is possible.  And those who have come so far on their journey to equality have a responsibility to reach back and help others join them. Because for all our differences, we are one people, stronger together than we could ever be alone.  That’s always been our story.

Unity then, is a good, as long as everyone is united behind the president’s position.

Obama invoked Robert Kennedy as well, bringing the liberal spirit of the 1960s into the modern Rose Garden with him:

Folks who were willing to endure bullying and taunts, and stayed strong, and came to believe in themselves and who they were, and slowly made an entire country realize that love is love.

What an extraordinary achievement.  What a vindication of the belief that ordinary people can do extraordinary things.  What a reminder of what Bobby Kennedy once said about how small actions can be like pebbles being thrown into a still lake, and ripples of hope cascade outwards and change the world.

America today jettisoned millennia of thinking about what marriage is. Perhaps the leader of this nation should be a little less certain that he knows better than all who came before him. And a little less certain he knows better than the Bible. Neither he nor anyone else understands the consequences of such dramatic change, which Obama himself said, struck like a “thunderbolt.”

This Supreme Court decision will cause wrenching divisions related to individual and religious freedoms. The president of all of us today should be a little less of an advocate and a little more of a healer, and a leader.

I’m not really sure I’ve ever seen a president heckled in the White House. And President Obama, quite properly, was having none of it. Obama was speaking during a White House LGBT event when someone from the LGBTQ group Get Equal named Jennicet Gutierrez began interrupting him. Q, um, is for “questioning.” She is described by ABC… END_OF_DOCUMENT_TOKEN_TO_BE_REPLACED

It’s intriguing on occasion to plumb the depths of Clinton – I mean both of them – insincerity by surveying their bows to political expediency. Here is a fascinating clip of Hillary Clinton, courtesy of the Washington Examiner, expressing her fundamental, irrevocable certainty that marriage is between a man and a woman, and nothing else.… END_OF_DOCUMENT_TOKEN_TO_BE_REPLACED