Carney Brings Back the Gaggle

White House Press Secretary Jay Carney will “gaggle” this morning at 10:00 am, before briefing at 3:00 pm.

The gaggle is an off-camera but on the record briefing that was held at the White House every morning until the waning days of the Bush administration, when Dana Perino ditched it.

It features some serious questioning minus the showboating that occurs during the daily briefing. Absent from the gaggle are the many unserious types who show up at the briefing mainly to catch themselves on C-Span .

Though answers can move markets and incite mass anti-American protests, it has an informal feel that sometimes brings more information out of the press secretary than we might otherwise get.

And it gives the press secretary an idea of what’s on people’s minds so he can prepare  answers – hopefully more informative ones – for the briefing.

We’ll see if Jay sticks with it. Gibbs also also at one point revived the gaggle, for about a day.

White House Press Secretary Robert Gibbs today is again convening a morning off-camera gaggle, which will be followed later by the regular on-camera briefing at 12:30.

This is  good news. The gaggle provides a more informal atmosphere for reporters to question the press secretary, to the benefit both the public and the White House itself. When Gibbs began yesterday’s gaggle, he pointedly stepped to the side of the lectern to emphasize the relaxed nature of the upcoming interchange. 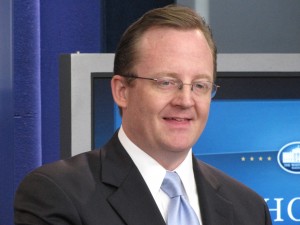 Now, don’t get me wrong, the gaggle is serious business. It’s on the record and the White House press secretary can still cause the stock market to plunge or ignite some kind of international crisis if he screws up. But the session brings several benefits to the cause of eliciting information from the White House – and presenting information from it.

When I first started covering the White House during the Clinton years, the gaggle was a standard part of the day’s repertoire. We would all crowd into Mike McCurry’s office each morning about about 9:30 to get a first crack at asking him some questions. Helen Thomas got a seat facing McCurry at his desk and fired away. As I remember, Mark Knoller, the CBS radio guy and devoted chronicler of the president’s various activities, took a seat next to her, asking questions and leavening the proceedings with his ample wit.

After Sept. 11, the number of people trying to attend the gaggle escalated to the point that reporters were flowing out the doors of the office. Then-Press Secretary Ari Fleischer moved the thing permanently into the briefing room, though with cameras and lights off. The gaggle lost some of its intimacy but retained its informal hue. 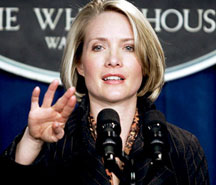 Toward the end of Bush’s second term, Dana Perino, who was otherwise a pretty good press secretary and generally straight with the press corps, scrapped the gaggle, offering some blather about the changing nature of the news cycle and the influence of the web on the immediacy of the news and whatever. But everybody knew that, with interest in Bush on the decline and all eyes turned toward the race to succeed him, she just didn’t feel like doing it anymore.

Gibbs chose not to revive the institution and has kept to just one briefing a day, on camera in the briefing room. Despite holding gaggles yesterday and now today, I doubt he’ll return to the practice full time. But I hope he does.

The gaggle’s informal nature and the lack of intrusive lenses frees the press secretary to speak more candidly. It’s just human nature. Everyone is still watching, but you don’t feel it as much.

It also helps build trust between the press corps and the press office. There’s a lot of laughter and banter in the gaggle, and for reporters, developing relationships is the key to getting information.

There is with this, though, the peril of the Stockholm Syndrome – the term for kidnappers getting too close to their victims. You get to know Gibbs, you grow to love him, and then you hesitate to take the tough angle your supposed to be taking in your stories.

Again, it’s human nature, and reporters need to resist it, and of course they often don’t.

One of the best features of the gaggle, though, is that it is conducted without the showboaters and maniacs who routinely show up at the briefing for the sole purpose of watching themselves on C-Span later in the evening.

You would be surprised how many people without a single relevant thought in their head or bearing some fringe agenda get seated for the cameras each day and start making nuisances of themselves. Faced with the choice of spending the morning in their pajamas or going to a briefing no one will see, they inevitably choose the former.

Often during the televised briefing, Gibbs spends about a half hour in the front row, where the TV stars preen for the network execs and the wire services trumpet their importance with a list of questions. These reporters are generally pretty good. But their question time could be cut by about two thirds without any noticeable peril for democracy.

Yesterday, Gibbs was almost immediately taking questions, some of them quite good, from the fourth and the fifth row. The gaggle mixes up the questioning, broadens the perspective, and gives serious journalists more floor time.

For the White House, it allows a crafty – that is, a good and skilled – press secretary to relay his message in an informal style that makes him more appealing to his captors. And it preps him for the briefing, where many of the same questions will come up.