In case you had not heard the news, the agony of watching Cory Booker campaign for president is over.

He falls in the category of manchildren, along with Beto O’Rourke, who were never suited to the presidency, something Democrat voters perceived. And because expectations for both were so high, and they did so poorly, they likely will never run for president again.

At least Booker holds his Senate seat. O’Rourke could not get elected to any office in Texas, I don’t think, at least not statewide, after threatening to raid everyone’s gun safes.

Anyway, President Trump had a little fun with Cory.

The Washington Post has an interesting piece today about how Cory Booker became close friends with a Hasidic rabbi during the early 1990s while he was Booker was studying at Oxford.

Booker, while remaining a Christian, became co-president of a Jewish group on campus. The two had a close friendship for two decades until falling out over the last few years.

The Jewish festival of Purim was in full swing: Music was blasting, family and friends were bouncing to the beat, and 6-foot-3 Cory Booker was laughing and dancing while carrying a 5-foot-6 Orthodox rabbi in a clown suit on his back.

It was March 1993 at Oxford University, where Booker, then 23, was studying for two years on a prestigious Rhodes Scholarship. The man on his back was Shmuley Boteach, an American rabbi who was his close friend and spiritual mentor during what Booker describes as a “profoundly shaping” period of his life.

“My spiritual life really took off at Oxford, and just so many things about that experience were profound to me,” said Booker, who credits the Rhodes program with nurturing the politics of “common ground” and “love” that he now espouses as a Democratic presidential candidate.THE PURSUITFirst in a series on the 2020 presidential candidates.

Booker’s intense and unlikely friendship with Boteach, who was sent by the ultra-Orthodox Chabad-Lubavitch Hasidic sect to establish a presence at Oxford, was a main pillar of his time in England, from 1992 to 1994.

The two men in their 20s seemed to be always together — often with Booker in a yarmulke and Boteach in a Malcolm X baseball cap — and were energized by each other’s outsize charisma and shared passion for religious study, according to interviews with them and more than a dozen people who were close to them at Oxford.

They spent virtually every Friday evening together with other students studying and debating Torah and often eating “kosher soul food” cooked by Booker and by Boteach’s wife, Debbie.

Judaism became a lifelong passion for Booker, and he still quotes Torah passages he learned from Boteach, in Hebrew, from memory on the campaign trail. But after two decades, Booker, 50, and Boteach, 52, are no longer on speaking terms.

There doesn’t seem to be any filter between Democrats’ brains and mouths these days, the latter far larger than the smaller.

It’s just, hey, whatever crazy idea pops into our head, whatever it costs let’s do it! Or, you know, you lack imagination. You lack dreams.

They seem to have abandoned any notion of common sense and believe Americans will fall for it. They’re making Hillary Clinton look like Calvin Coolidge.

UPDATE: Since posting this, I learned that Booker spent many years living in a low-income neighborhood. So I give him credit for that. Maybe I was a little too snarky here. Few politicians do things like that. Booker still strikes me as a poser. But he did apparently walk the walk, risking his life in doing so.

It’s Cory Booker, speaking to some admirers as he walks through a low-income neighborhood in this new campaign video announcing he is running for president.

Wassup with that? His parents were both executives at IBM. Is that how they talk in the IBM corporate suite?

Anyway, why pick on a politician doing politician stuff? Cory, Yale Law School graduate and Rhodes Scholar, is a man of the people. Because that’s who will be voting in 2020.

The video is heavily focused on race. It stars a gender-neutral kid playing drums. And of course, it’s completely vacuous, but quite nicely done.

That’s the only reason I can think of at this point for him to have to go.

Sen. Cory Booker, D-N.J., Thursday during the Brett Kavanaugh Supreme Court hearing proclaimed that he was in the midst of an “I am Spartacus moment” and offered to fall on his sword and suffer the consequences, including possibly expulsion from the Senate, over the principle of releasing documents that had not been cleared for release.

Except, they had been cleared for release.

Booker is using the hearings to launch his 202 presidential campaign.

Here’s another video of Booker and the Justice Committee Democrats questioning Kavanaugh.

Democrats, led by Sens. Cory Booker and Kamala Harris, who are going to run for the Democratic nomination for president, were joined by protestors in staging major interruptions to the start of the Judiciary Committee hearing on the nomination of Brett Kavanaugh for the Supreme Court.

Felt sorry for Kavanaugh’s daughters, must have been traumatic, even though I’m sure people tried to prepare them for what was to occur.

I assume the outbursts by the demonstrators only help Republicans, as average people get more exposure to the type of people who will be running the country once the “Democratic Socialists” seize power.

Lots of excitement. Have a look.

Great work here by the Washington Free Beacon. The reason there are two Cory Bookers is that there is no Cory Booker. He’s a phony.

I can’t wait to see him on the campaign trail in 2020 running for president because, to be honest, I love hating phonies. 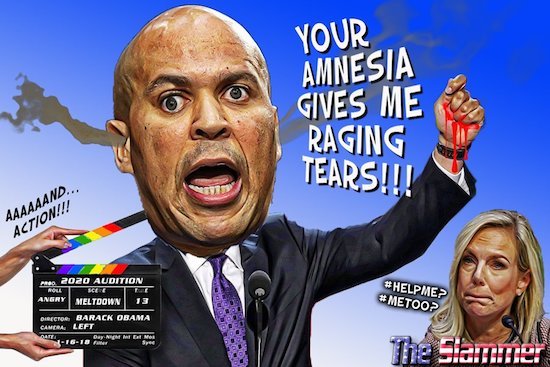 New Jersey Democratic Sen. Cory Booker compared Department of Homeland Security Secretary Kirstjen Nielsen to a Nazi, saying she lied to protect Donald Trump and in doing so was like Nazis who defended themselves by claiming they were just doing their jobs. Booker made the accusation during an appearance this week on “The Breakfast Club,”… END_OF_DOCUMENT_TOKEN_TO_BE_REPLACED