President Trump said Wednesday that the coronavirus outranked the two of the worst calamities of the past 100 years.

I don’t think he should be comparing these things. It’s not necessary. These are all tragedies.

Seems like Trump wants to reserve for himself stewardship of the country during the HUGEST tragedy of all. And he wants to explain why the economy has tanked.

President Obama today said the United States tortured people in the aftermath of the 9/11 attacks, saying that while he understood the emotion that drove the practice, it was nevertheless unequivocally wrong.

Obama spoke today during an impromptu press conference at the White House. “We tortured some folks,” Obama said during a long answer to a question not directly concerning the response to 9/11.

Obama has previously referred to water boarding, which was practiced following 9/11, as torture. And in May 2013 he said that “I believe” that the United States “compromised our basic values — by using torture to interrogate our enemies.”

But it is not clear he has made the charge as directly and unequivocally as he did today. Obama did not this time say specifically which practice he was referring to.

Bush administration officials have acknowledged that the practices were harsh, but say they stopped short of torture.

President Obama spoke movingly at the 9/11 Museum dedication Thursday, and I thought you might want to have a look in case you missed it.

Obama, who had clearly just been deeply affected by a tour of the museum and a visit with 9/11 families, spoke somberly and with great emotion. And with mercifully little of the self-reference that often characterizes his speeches on any occasion.

The remarks and their delivery are brilliant. Obama deftly intertwined the story of one man, the man with the red handkerchief, into a tribute to all affected by the tragedy and, ultimately, to America itself.

It’s one of the very best speeches I’ve ever heard him deliver. And I’ve heard a lot of them.

Here are some words to remember:

Here, at this memorial, this museum, we come together.  We stand in the footprints of two mighty towers, graced by the rush of eternal waters.  We look into the faces of nearly 3,000 innocent souls — men and women and children of every race, every creed, and every corner of the world.  We can touch their names and hear their voices and glimpse the small items that speak to the beauty of their lives.  A wedding ring.  A dusty helmet.  A shining badge.

Here we tell their story, so that generations yet unborn will never forget.  Of coworkers who led others to safety.  Passengers who stormed a cockpit.  Our men and women in uniform who rushed into an inferno.  Our first responders who charged up those stairs.  A generation of servicemembers — our 9/11 Generation — who have served with honor in more than a decade of war.  A nation that stands tall and united and unafraid — because no act of terror can match the strength or the character of our country.  Like the great wall and bedrock that embrace us today, nothing can ever break us; nothing can change who we are as Americans.

Nothing can ever break us; nothing can change who we are as Americans.

Biden Offers a Moving Tribute to the Victims

You may remember that Vice President Biden suffered his own horrifying loss in 1972 when his wife and year-old daughter were killed in a car crash. His son Beau, who along with brother Hunter survived the crash, served a few years ago in Iraq with the Delaware Army National Guard.

Biden refers to the deaths of his wife and daughter during the remarks, which are excerpted below.

I know you do too. 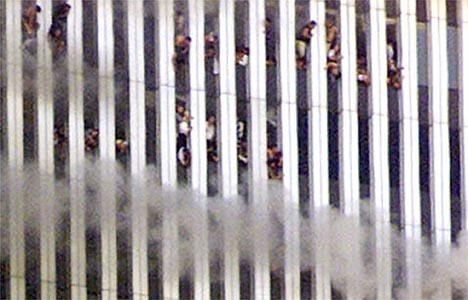 To anyone who lost a loved one that day, or a friend, or a colleague, my heartfelt wishes that time has made it easier for you.

Memories and Thoughts of 9/11

I just wanted to write something to give you all a chance to express how you feel on this day or to share a memory of what you experienced ten years ago.

I was the White House reporter for a publication called CongressDaily, but my experience was little different than that of many others.

I had an article due and had made an unusual decision not to go into the White House during the morning, but to finish it up at home and then head over a little later. I had just returned from the gym and turned on the TV, I think just after the first plane hit the North Tower. After the second plane hit, I called my editor but was told to stay at home, since it would be impossible to get into the White House, and Bush was in Florida.

So I watched it on TV, in disbelief.

Viewing the ceremonies this morning, long afterward, the disbelief of course is gone. Some of the anger remains. But mostly for me there is sadness. So much was lost, so much grief and death inflicted upon us, just so that people of pure evil could vent their resentment and rage at the United States in the most graphic way they could think of.

What they got instead for their efforts was a reminder of why the United States is the greatest nation in the history of the earth. A nation of resilience, compassion and love – and of indomitable determination to bring justice to its enemies. We are slow to anger, but when roused, we are still fearsome.

And a nation blessed by God. That’s what our enemies found out, whether they learned it in this life or the next.

Obama: We Will ‘Never’ be at War With Islam

President Obama commemorated 9/11 attack at the Pentagon this morning by saying Islam is not the enemy. Here’s what he said on the issue.

They may seek to exploit our freedoms, but we will not sacrifice the liberties we cherish or hunker down behind walls of suspicion and mistrust.  They may wish to drive us apart, but we will not give in to their hatred and prejudice.  For Scripture teaches us to “get rid of all bitterness, rage and anger, brawling and slander, along with every form of malice.”

They may seek to spark conflict between different faiths, but as Americans we are not — and never will be — at war with Islam.  It was not a religion that attacked us that September day — it was al Qaeda, a sorry band of men which perverts religion.  And just as we condemn intolerance and extremism abroad, so will we stay true to our traditions here at home as a diverse and tolerant nation.  We champion the rights of every American, including the right to worship as one chooses — as service members and civilians from many faiths do just steps from here, at the very spot where the terrorists struck this building.

Those who attacked us sought to demoralize us, divide us, to deprive us of the very unity, the very ideals, that make America America — those qualities that have made us a beacon of freedom and hope to billions around the world.  Today we declare once more we will never hand them that victory.  As Americans, we will keep alive the virtues and values that make us who we are and who we must always be.

You can find the rest of his remarks here.

Thank you for your support!