Illegal migration across the Mexican border this year is little different than it was under President Obama and, compared to some years, may even be higher, according to data released by the Department of Homeland Security’s United States Customs and Border Protection agency.

September looks to be even worse. According to the Washington Post, a record number of migrants with children entered the United States illegally in September. Border patrol agents arrested 16,658 family members in September, the highest one-month total on record and 80 percent higher than the number arrested in July.

What all of this means, according to the CBP, is that laws need to be changed in order to address the issue:

The August Southwest Border Apprehension/Inadmissible numbers are a clear indicator that the migration flows are responding to gaps in our nation’s legal framework. While the overall numbers are consistent with an expected seasonal increase, the number of family unit apprehensions increased 38%, approximately 3,500 more than July. In August, the number of family units apprehended represented 34% of all Southwest Border apprehensions, an increase from an average of 25% for the year.

A graph released by the CBP shows that, essentially, nothing’s changed. 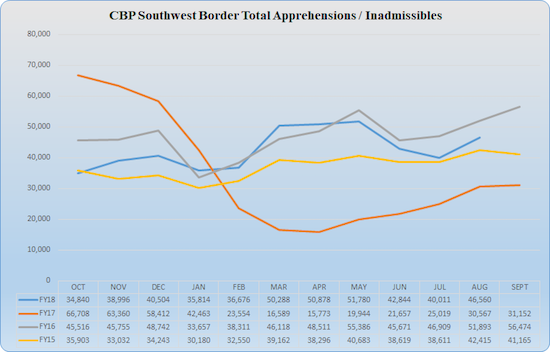 When President Trump last spring sought to apply existing laws to the illegal immigration problem, he was accused of cruelly separating families. Democrats in Congress, instead of acting to change statutes so that families could be held together, insisted that Trump step back from the “new policy” of enforcing the law. Faced with a public relations nightmare, Trump complied.

The president, obviously frustrated by his inability to solve the problem, Thursday said he would send troops to the Mexican border if necessary to stop the incursion of illegal crossers and the flow of drugs into the country.

I am watching the Democrat Party led (because they want Open Borders and existing weak laws) assault on our country by Guatemala, Honduras and El Salvador, whose leaders are doing little to stop this large flow of people, INCLUDING MANY CRIMINALS, from entering Mexico to U.S…..

….In addition to stopping all payments to these countries, which seem to have almost no control over their population, I must, in the strongest of terms, ask Mexico to stop this onslaught – and if unable to do so I will call up the U.S. Military and CLOSE OUR SOUTHERN BORDER!..

….The assault on our country at our Southern Border, including the Criminal elements and DRUGS pouring in, is far more important to me, as President, than Trade or the USMCA. Hopefully Mexico will stop this onslaught at their Northern Border. All Democrats fault for weak laws!