Pelosi’s Email Bait and Switch: Says She’s Not Asking for Cash — Then Asks for Cash

Maybe next we’ll find her outside the Capitol playing Three-card Monte with passersby.

I can’t for the life of me understand how this does not qualify as a genuine, vintage, unabashed scam. House Minority Leader Nancy Pelosi keeps sending out emails with a subject line saying she’s not trying to pick your pocket. But the email includes a link that leads you to a page that demands money.

Ostensibly, she just wants your opinion. It’s a poll, see?

For the purposes of gathering news, I’m on various Democratic email lists. Pelosi is sending me missives from the House Democrats’ fundraising arm, the Democratic Congressional Campaign Committee – now that’s your first hint she actually wants money – asking me to complete a poll.

Now that sounds pretty clear to me. After some political gibberish, she gets to the point with a line at the end of the email: “Please, before midnight — will you complete your survey? Your voice is more important than you know.”

If you click on the link, you find that Ms. Pelosi is indeed conducting a survey, of Democrats, including such scientifically derived questions as, “Do you oppose the Republican Party’s heartless budget?” and “Did you know that the Republican budget includes $4 BILLION in cuts to Social Security?” The choices for answering the latter question are, “Yes, it’s awful” and “No, but I do now.”

Scroll to the end of the short poll, and you find what is obviously the question she most sincerely wants an answer to: “Will you pitch in $3 (or more!) to support the DCCC in its mission to help Democrats take back the House?”

You’re given five choices with different amounts, including your own. Surprisingly enough, each response starts with “Yes!” 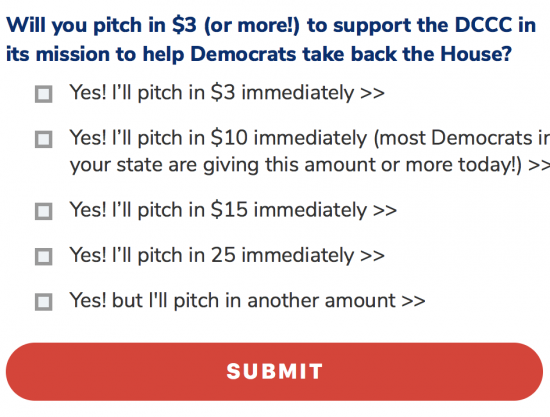 Nancy, I thought you weren’t asking for money?

On June 24 she was back with an email titled, “need input NOT money” noting, “My new budget survey is the most critical I’ve sent to you all year — but my records show you haven’t responded to me yet.”

Again, there’s a link to a survey that ends with a cash grab. And most recently, on July 11, the same subject line, this time corrected with a comma, ‘need input, NOT money.” Same deal on the survey.

I gather the attorneys could claim that she is merely seeking your opinion about whether you want to contribute, not asking you to!

But in places where people try to be honest, this is what is called bait and switch.

And Democrats accuse President Trump of running a con . . .

10 thoughts on “Pelosi’s Email Bait and Switch: Says She’s Not Asking for Cash — Then Asks for Cash”