They said it couldn’t be done. They said we don’t make things in America anymore, because the Chinese will do it at slave labor rates.

People said we’d have to move into hi-tech “sunrise” industries that would require everyone to get a college education – and of course, the government to pay for it. And we would be more centered on services. We could all just become attorneys!

But manufacturing jobs under President Trump are growing, by a lot, after declining under Barack Obama. Just maybe the theory that if you pay workers enough and combat unfair trade practices, we can bring back manufacturing in this country.

It was one of Trump’s key promises during the campaign, and it is being kept.

The economy added 18,000 jobs in the manufacturing sector in May, according to the latest jobs report from the Department of Labor, released Friday. Since January 2017, when Trump took office, 304,000 manufacturing positions have been created – a small city’s worth of jobs. 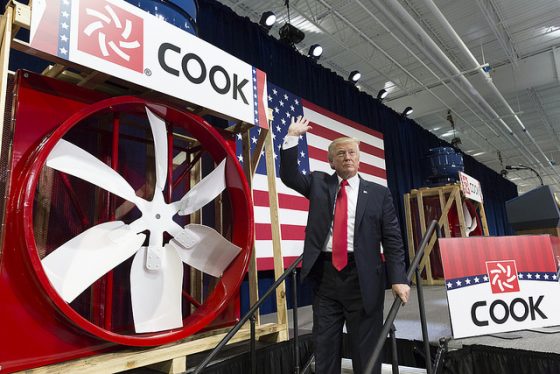 Now where is all the reporting and TV news about that? Buried beneath Robert Mueller’s Russia, etc. investigation, that’s where. Most national reporters live in Washington or New York and don’t know any factory workers and don’t think about them. They don’t give a crap about manufacturing unless it has to do with manufacturing their lattes.

Here’s the rest of today’s employment news, which I’ve assembled – um, manufactured – from dispatches from the Wall Street Journal:

The unemployment rate unexpectedly fell to 3.8% in May, matching April 2000 as the lowest reading since 1969. The U.S. added 223,000 new jobs in May, beating economist expectations of 190,000. Average hourly earnings rose by 8 cents to $26.92 in May. From a year ago, wages were up 2.7%–better than the 2.6% growth economists had forecast. The May jobs report brought another curious decline in the share of Americans working or looking for a job, with the labor force participation rate edging down to 62.7% from 62.8% in April.

Meantime, Trump is being accused of revealing the report with a tweet suggesting it might be positive.

Looking forward to seeing the employment numbers at 8:30 this morning.

From the Wall Street Journal:

President Trump’s tweet ahead of the jobs report caught some bond traders off guard and sparked conversation across trading floors. It was “something that I haven’t seen before, at least in my career, from the President,” said Michael Lorizio, a bond trader at Manulife Asset Management. Treasury yields rose after the tweet and ahead of the jobs report. The yield on the 10-year note was recently up 0.09 percentage point at 2.91%.

Meantime, black unemployment fell to the lowest point ever, dropping from the previous record low of 6.6 percent to 5.9 percent. Not bad for a white supremacist president, is it?