The Method To Trump’s Supposed Madness

It’s a funny thing how none of President Trump’s critics and haters, particularly the putatively smart observers in the press, ever get what he is doing. He’s a step ahead of them and he’s outwitting them, even as they preach to him from what they think is a perch at least twenty IQ points above his.

But as Trump said Saturday night at a gathering of veterans in Washington, the media are in fact looking up to him as he stands upon on the presidential bully pulpit. “I’m president and they’re not,” he noted.

There is a method to President Trump’s madness, and yes, he is crazy like a fox. While the media speculate about Trump’s mental health, they continue to underestimate him and get him wrong, as they have for two years now. Isn’t the definition of insanity making the same mistake over and over and over again?

Trump’s calculation is this: By baiting the media with his Twitter account, Trump is both revealing and provoking their instinctive liberal bias, helping undermine their legitimacy. And he is maintaining the energy and commitment of his voter base, which reviles the mainstream press.

Now, even if they serve a purpose, I don’t like Trump’s recent tweets. I don’t think the president should be lobbing barbs at women’s faces or putting up videos altered to show him punching out the media. And yes, I agree with those in the press who are concerned it could provoke violence against reporters. The president is supposed to be an inspiration. If he is demonstrating violence, he may well inspire it. It’s not a case of lacking a sense of humor to take seriously the gif of him beating on Vince McMahon with a CNN logo on his head.

But I do I enjoy a good chuckle over conservatives who were outraged that Barack Obama had his feet up on the desk in the Oval Office but who somehow think this is acceptable. It’s not.

And I worry, as I wrote, that Trump lets things get under his skin and that they fester there. I am concerned that the next people who will go subdermal on Trump are Vladimir Putin, Xi Jinping, and Abu Bakr al-Baghdadi, should he still be alive. And that could have serious consequences.

But I’m not quite sure how worried I should be because, even if he is genuinely angry, Trump also knows what he is doing and is never, ever, as spontaneous, reactive, and improvisational as his critics think he is. And by the way, he possesses the twenty IQ points journalists think they have on them, plus a few. Maybe quite a few. 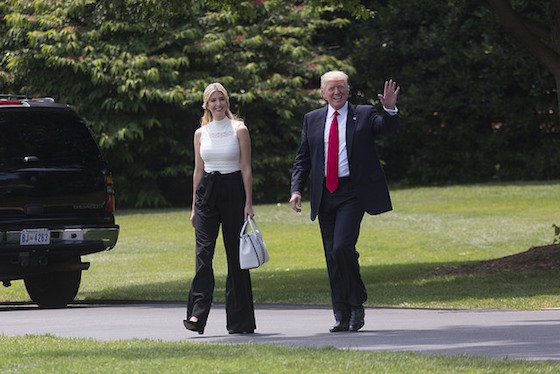 “He was playing people,” said Tony Schwartz, who helped Trump write “Art of the Deal,” in an interview with the New Yorker last summer. The New Yorker paraphrased Schwartz, who listened in on many Trump calls: “On the phone with business associates, Trump would flatter, bully, and occasionally get mad, but always in a calculated way,” the New Yorker wrote.

In another venue, Schwartz, who hates Trump and wanted to harm his candidacy, recalled that he once saw Trump verbally abuse someone on the phone, hang up, look at Schwartz and calmly say something like, “Do you think it worked?”

I’ll bet it worked because it’s working now. “Morning Joe” used to be an oasis of intelligent and informed news commentary from both sides of the aisle. But Joe Scarborough and Mika Brzezinski’s pique at Trump has sent the show crashing into the gutter, just another partisan stage for showcasing Trump hatred. And CNN has shed its labored efforts to portray itself as a neutral alternative to MSNBC and Fox News, working itself up into a fit about Trump and flinging itself over the left, where, as some recent ratings show, it will have a hard time competing with MSNBC.

Trump may just be destroying CNN, as he intends. Or rather, helping them destroy themselves.

“The fake media tried to stop us from going to the White House, but I’m president and they’re not,” Trump said Saturday.

“The fact is the press destroyed themselves because they went too far. Instead of being subtle and smart, they used the hatchet and the people saw it right from the beginning.”

That’s right. The press used to be subtle about its liberalism. Or at least more subtle. Now they’re over the top. And they’ve raised doubts, probably even among independents, about whether they can be trusted. Meanwhile, Trump has inspired his band of followers to fight on, sparking an energy he may need if Republicans in Congress fail to enact the agenda they’ve been promising for nearly a decade.

Trump recognizes subtlety because he practices it. And one way he does it is by appearing to be unsubtle.

39 thoughts on “The Method To Trump’s Supposed Madness”