The latest news indicates that the British-born citizen of Libyan extraction who committed terrorist bombing in Manchester this week had ties to Islamists in his parent’s home country.

Now you remember who is responsible for the situation in Libya, don’t you?

In Libya, meanwhile, an official said counterterrorism authorities have arrested at least two members of the family of the bomber, Salman Abedi, including a younger brother suspected of planning an attack in Libya’s main city, Tripoli.

Dagdoug said Hashem was also in frequent contact with his brother Salman in Manchester and was aware of the plans to attack the concert.

It was unclear whether Abedi’s family were a key part of the network planning the Manchester attack, but authorities were increasingly exploring the emerging connections between Britain and Libya.

Muammar Qaddafi was a brutal dictator. But at the moment in 2011 when Barack Obama and his incompetent Secretary of State, Hillary Clinton, decided to remove him from power, he wasn’t bothering the United States. In fact, he was acting pretty friendly and had given up his nuclear weapons program, and he was obviously keeping a lid on Islamic extremism within his own country. 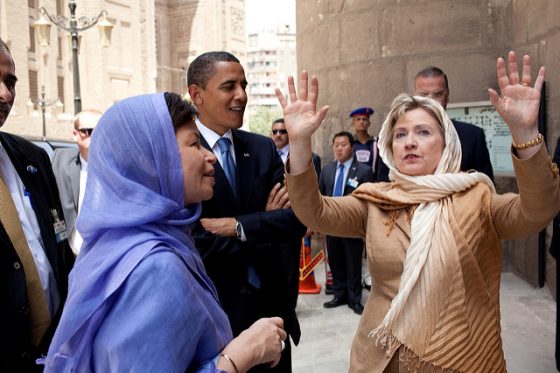 President Trump, of course, is getting attacked for being too friendly with Middle East satraps and failing to fully harangue them about their human rights records. But Trump has the right idea. This is a barbaric corner of the world, and only nasty operators can keep the savagery at bay and from becoming organized in a way that it comes to get us.

We’ve seen this in Libya, Iraq, and Syria, and we will see it elsewhere if we undermine friendly Arab leaders. We saw it in Egypt until Egyptian President Sisi stepped in and solved the problem.

Sure, we should push for reform in these societies. But the priority has to be having people in charge who can maintain order and keep terrorism at bay. The “underlying problems” in these cultures are not going to be fixed by allowing and abetting revolutions that put Islamists in power or that create chaos that permits Islamists to thrive.