Obama Vows Mars Mission Even as He Cuts NASA’s Budget

President Obama published an op-ed for CNN today declaring that we are going to Mars AND HE’S RESPONSIBLE, thank you very much.

One of my earliest memories is sitting on my grandfather’s shoulders, waving a flag as our astronauts returned to Hawaii. This was years before we’d set foot on the moon. Decades before we’d land a rover on Mars . . .

The next step is to reach beyond the bounds of Earth’s orbit. I’m excited to announce that we are working with our commercial partners to build new habitats that can sustain and transport astronauts on long-duration missions in deep space. These missions will teach us how humans can live far from Earth — something we’ll need for the long journey to Mars . . .

Someday, I hope to hoist my own grandchildren onto my shoulders. We’ll still look to the stars in wonder, as humans have since the beginning of time. But instead of eagerly awaiting the return of our intrepid explorers, we’ll know that because of the choices we make now, they’ve gone to space not just to visit, but to stay — and in doing so, to make our lives better here on Earth.

CNN’s website is a model of Obama glorification. Look at this. 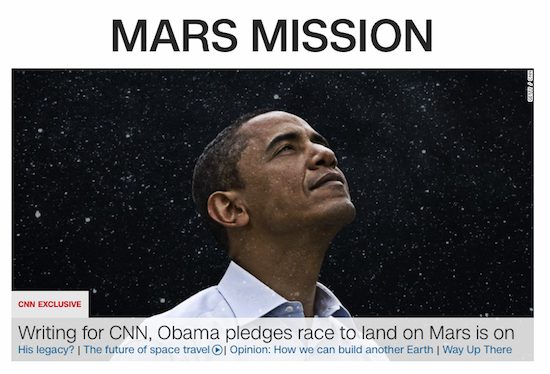 Of course, Obama forgets to mention in the piece that, memories of grandpa and astronauts being fished out of the sea near Hawaii aside, he proposed earlier this year significantly cutting the funding for space exploration so he could pursue all his various earthbound social welfare and environmental policies.

“This administration cannot continue to tout plans to send astronauts to Mars while strangling the programs that will take us there,” Texas Republican Rep. Lamar Smith, chairman of the House Science Committee, told The Daily Caller in February. “President Obama’s 2017 budget proposal shrinks our deep space exploration programs by more than $800 million. And the administration once more proposes cuts of more than $100 million to the Planetary Science accounts, which have previously funded missions like this past year’s Pluto flyby.”

That, even as the overall federal budget continued to increase. Universe Today reported:

The 2017 budget proposal would slash funding to the very programs designed to expand the frontiers of human knowledge and aimed at propelling humans outward to the Red Planet and robots to a Jovian moon that might be conducive to the formation of life. Absent sufficient and reliable funding to keep NASA’s exploration endeavors on track, further launch delays are almost certainly inevitable – thereby fraying American leadership in space and science.

This is clearly more Obama legacy garbage. The Great Man wants to be credited for stemming the rise of the oceans and, should that fail, finding another place for humans to live. CNN is only too happy to help him construct his ongoing self-hagiography.

No doubt this is another thing Obama watched, at least as a replay, at his grandfather’s side, thinking, Why not me?