In a poll taken after Donald Trump’s lewd remarks in a 2005 videotape were revealed, Trump’s support declined just one point and the margin between him and Hillary Clinton grew just two points. Trump now trails Clinton nationally by 42-38 percent after previously trailing by 41 to 39 percent.

According to Politico, which conducted the poll:

A wave of Republican officials abandoned Donald Trump on Saturday, but, at least for now, rank-and-file Republicans are standing by the party’s presidential candidate, according to a new POLITICO/Morning Consult poll conducted immediately after audio was unearthed Friday that had the GOP nominee crudely bragging about groping women and trying to lure a married woman into an affair.

Overall, fewer than four-in-10 voters — 39 percent — think Trump should end his presidential campaign, while only slightly more voters, 45 percent, think he should not drop out.

As of now, GOP voters largely want the party to stand behind Trump. Nearly three-quarters of Republican voters, 74 percent, surveyed on Saturday said party officials should continue to support Trump. Only 13 percent think the party shouldn’t back him. 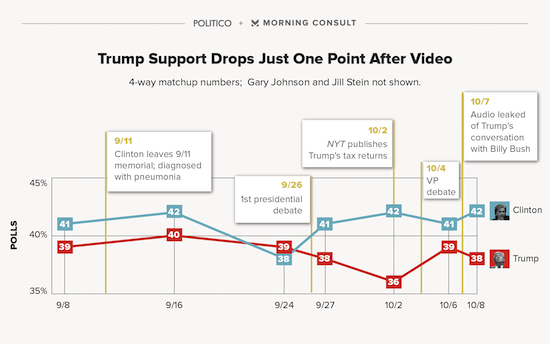 Tonight’s debate is now more critical than ever for Trump. Does he try to apologize and talk issues, or apologize and go after Bill Clinton — and Hillary’s enabling? What do you think?