Obama Statement on Shimon Peres: But Enough About Me

“I will always be grateful that I was able to call Shimon my friend.”

Like, what kind of friends? As in, Hey Shimon, I’m calling because you’ll never guess what happened to me today!”

They weren’t friends. I doubt if Peres, whose personality was seared in the struggle for the birth and preservation of Israel, had much respect for this man who rose to power through charm and little else. A man who offered up a moral equivalence between the Israelis and the Palestinians, pressuring the Jews into concessions and treating with disrespect Israeli Prime Minister Benjamin Netanyahu because he personally disliked him.

That is, he didn’t consider Netanyahu a “friend.”

Obama will go down in history as the man who may have sealed the destruction of Israel by allowing Iran to gain nuclear weapons and, most likely, setting off a nuclear arms race among Arab states in the Middle East. We should have taken care of the Iran problem ourselves, but failing that, no doubt the Israelis were inhibited from doing so partially because they knew the petulant American president would sternly object. 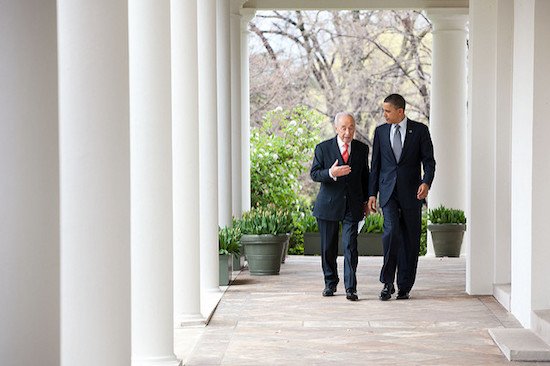 Obama will be in Israel Friday for Peres’ funeral and no doubt take the opportunity to lecture Israelis on how they have abandoned Peres’ vision of peace.

But the Israelis are faced with implacable enemies who, even among their average citizens, aspire to throw the Jews into the sea. The Palestinians were offered generous peace terms during Bill Clinton’s last year, and they rejected them and launched a new round of terrorism instead.

The Israelis have taken distinctly non-Obama style steps to combat the Intifada, the polite name for Palestinian terrorism, building their own wall and responding with harsh measures. It’s worked. Hopefully, in a few months, they will be dealing with a president who understands a little better the terrible vice Israel is squeezed into.

48 thoughts on “Obama Statement on Shimon Peres: But Enough About Me”