We Can All Agree: Nobody Knows What’s Wrong With Hillary

Now that’s something we can all agree on, right? Nobody knows exactly what her problem is. Simply put, because she lies and hides things. Everyone knows that.

Hillary Clinton’s campaign issued what is actually a quite uninformative statement that the Democratic nominee has pneumonia, needs some rest, and is on antibiotics. The very inadequacy of this ostensible attempt to be “open” suggests she is hiding something.

Many questions are left unanswered. Why was this not announced Friday when she was diagnosed? What kind of pneumonia is it, and how bad is it? How long has she had it? Why is she still mingling closely with people and giving bear hugs when she has what must be a communicable disease? She continued interacting with people even after she had just started antibiotics. Is the pneumonia secondary to some kind of underlying condition?

Not only do we not have enough information, but we also have with us the incontrovertible fact that Mrs. Clinton is a inveterate, and proven, public liar. Now — let’s be bipartisan for a moment: Donald Trump also has a very casual relationship to the truth. We can’t trust either of these two, and far less than we can trust even typical politicians. But we know Clinton has lied in major ways, and that statements from her and her campaign cannot be relied upon.

She told her daughter the night of Benghazi that terrorists were responsible for the attack while at the same time suggesting to the American people — and allowing others to state — that the attack was the result of an incendiary video. She offered up an elaborate story about incurring Serbian sniper fire, when nothing of the sort happened. She indicated she had handed over all her work-related emails from her time as secretary of state, when in fact, she had kept and destroyed thousands. She even lied and said all her grandparents were immigrants when, in fact, only one was.

I don’t think I have to go on trying to convince the average person, even the average Clinton supporter, that she dissimulates. Polls tend to show that about two-thirds of respondents find her untrustworthy. 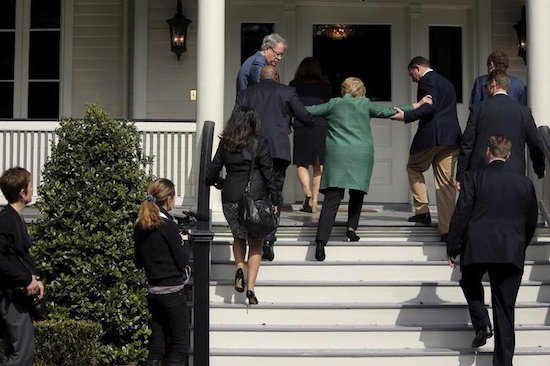 The first thing a candidate for president would lie about, even a relatively honest one, is their health. We’ve even seen it before. Woodrow Wilson, Franklin Roosevelt, and John F. Kennedy all attempted to hide or obscure major illnesses and infirmities.

Former Massachusetts Sen. Paul Tsongas sought the Democratic nomination in 1992, saying he had been free for years of the cancer that had ailed him, which he had not, and suggesting he was cured. By January 1997, he was dead from it.

Perhaps there’s nothing particularly wrong with Mrs. Clinton, and she just has a case of walking pneumonia and is otherwise healthy as a thoroughbred. But her history, and that of those who have come before, leads to the inescapable conclusion that we can all join hands in unity and say together: Who the Hell knows?

Until she releases her full medical records — which she won’t since she would have already — we will not understand what’s wrong with Hillary Clinton, though we know something is. And that should be disqualifying.

33 thoughts on “We Can All Agree: Nobody Knows What’s Wrong With Hillary”