Today’s news that Afghan forces trying to hold a provincial capital have been surrounded by the Taliban brings to mind an astounding fact: President Obama has been in power eight years, and he has failed in that time to win the two wars he was handed. To the contrary, Iraq, which was basically peaceful, became a war again and expanded into Syria, Libya and elsewhere as the opposition morphed into ISIS under Obama’s watch.

Afghanistan, which was supposed to be the good war in Obama’s opinion, remains besieged, we remain involved, and the war will simply be handed to Trump or Clinton.

The Taliban attack on the provincial capital “has exposed how thinly stretched Afghan security forces have become as they try to contain Islamist insurgents in other areas of the country,” according to Reuters.

I thought after Vietnam we were going to fight wars to win them, or not fight them at all. Obama’s vow was to “degrade” the Taliban. It was a half-measure.

His goal was not exactly to win the war. And in that, he’s succeeded. 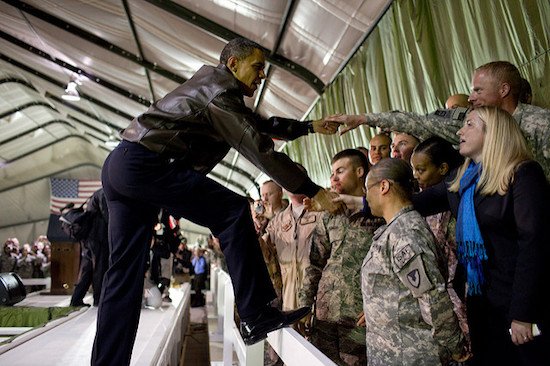 Meantime, Russian jets are fearlessly buzzing ours, China is claiming the South China Sea without apparent repercussions, North Korea is expanding its nuclear capability, and Iran has been granted its own nuclear arms. And of course, al Qaeda is still very much around.

And Obama has gutted the military, with the latest report that he plans to delete another 25,000 soldiers from the army. Because, well, he’s made the world so safe! We can now focus our resources on recruiting food stamp recipients instead.

Is there any commander in chief with a worse record than Obama? No wonder we’re not respected around the world.

At least in eight years he fixed the economy.

Oh, wait, he didn’t do that either.