Democrats are the best at crying “conflict of interest” and claiming that malevolent, hidden forces are robbing average folks of their rights. And so, let’s take a moment to observe the utter hypocrisy of the sanctimonious Left in not calling out the Obama administration for its rank attempts to influence an ongoing criminal investigation. Efforts which may have played a part in FBI Director James Comey’s announcement today that Hillary Clinton would not be indicted.

The banner child for this campaign is, of course, President Obama himself. A president who was actually a “constitutional scholar,” as Obama pretends to be, or who cared the least bit about the American criminal justice system, would at least resist openly embracing Hillary Clinton until the decision had been made on whether to indict her. It’s not like that decision was to be long in coming. Many expected it this week or next, which would have left Obama plenty of time to campaign for Mrs. Clinton. 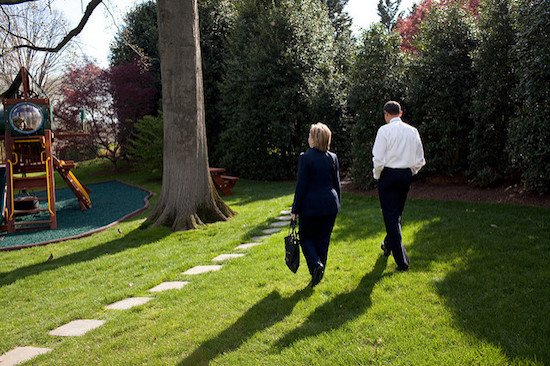 Instead, the president endorsed Clinton and today campaigns with her in Charlotte, North Carolina — an appearance scheduled before Comey made his announcement. The purpose was clear. And even if it weren’t intended, which it is, the result would be obvious. The people within the FBI and the Department of Justice received a clear signal from the president about how he wanted this investigation to pan out.

Imagine if you, at your job, were performing some kind of analysis. And the company CEO, or the firm’s owner, gave you an indication about what he or she wanted you to deduce. You might decide to ignore their wishes. But it wouldn’t be easy. And even if you told yourself you were doing an independent analysis, the fact of the boss’s preferences could not help but subtly affect what you are doing. That’s human nature.

Add into this Attorney General Lynch’s egregious decision to meet with Bill Clinton – which should be a firing offense – and Sunday’s reported whispering by Democrats to the New York Times that Hillary might just, you know, keep Lynch as attorney general – and you have a full plate of corruption on your table.

Corruption in the service of installing the next corrupt regime, that of Hillary and Bill Clinton.