In his remarks about the Supreme Court decision ending his amnesty power grab, President Obama indicated what he really thinks, which is that the millions who want to stop illegal immigration and stem the flood of immigrants from a single culture not our own are, at bottom, racist.

Look closely at what he said:

In the end, it is my firm belief that immigration is not something to fear. We don’t have to wall ourselves off from those who may not look like us right now, or pray like we do, or have a different last name. Because being an American is about something more than that. What makes us Americans is our shared commitment to an ideal that all of us are created equal, all of us have a chance to make of our lives what we will . . . They do look like us — because we don’t look one way. We don’t all have the same last names, but we all share a creed and we all share a commitment to the values that founded this nation . . .

I promise you this, though — sooner or later, immigration reform will get done . . . We get these spasms of politics around immigration and fear-mongering, and then our traditions and our history and our better impulses kick in. That’s how we all ended up here. Because I guarantee you, at some point, every one of us has somebody in our background who people didn’t want coming here, and yet here we are.

That is, at some point, the racists and other intolerant types wanted us out.

Just as he thinks opposition to his gun control efforts are driven by gunmakers and not an embrace of the Second Amendment, the president does not understand or care about conservative principles. He merely, and quite simplistically and hatefully, thinks conservatives are at bottom evil or, as he euphemistically puts it, fail to respond to their “better impulses.”

Despite his supposed sophistication, Obama has a very crude view of America. For this moral relativist, there are no enduring American values to be treasured. Just a concern, grown out of the 1960s protests, that someone is getting an “advantage” over someone else, whether due to wealth or skin color. America is divided into those who seek equality of result, like Obama, and the haters, he believes. 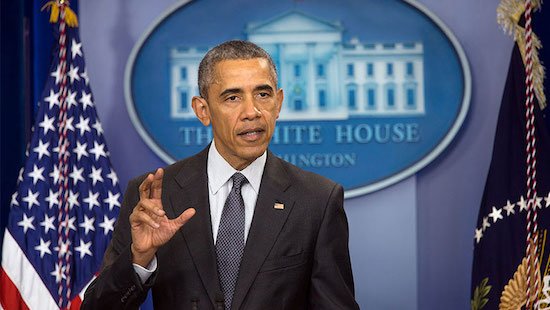 The culture from which many of these immigrants spring is a beautiful, interesting, but ultimately failed culture. They nevertheless have much to contribute to the United States, but not if they overwhelm the place. We cannot assimilate endless hordes of immigrants into the United States without adulterating our own culture and changing the basic assumptions of American life. But for Obama, to oppose limitless immigration is to oppose all immigration – which conservatives do not – and to hate people merely for who they are, because they don’t “look like us.”

Conservatives simply want to preserve the Republic, which requires a citizenry steeped in our values. If too many who do not understand or share our values are here at once, the culture is transformed, and assimilation will not occur. That is, the country will change, not the immigrants.

It’s not clear anymore that many of these immigrants understand that they need change. They are catered too by their government and others in their language rather than impelled to learn English. They name their children the same thing they would name them “back home.” They are given an educaiton the stresses “multiculturalism” and highlights the worst moments in U.S. history.

But Obama doesn’t understand America’s basic values, and as a man who wanted to “transform America,” is probably hostile to many of them, he doesn’t care about assimilation. He thinks it’s a relatively simple matter to become an American. And he thinks it is America that needs to assimilate into the world.

But he may be right. In the long run, because the forces of political correctness are so strong, he probably will get his way eventually. Which is why a lot of Americans felt that only someone like Donald Trump, with all his outrages, could change the trajectory.

23 thoughts on “Obama Suggests his Immigration Opponents are Racist”