Sixty three percent of Donald Trump’s GOP supporters say that if he earns the most delegates in the primaries but fails to secure the Republican nomination in Cleveland, he should run as an independent or a third-party candidate, according to a newly released CBS poll. Among all Republicans, a third think he should run on his own.

The poll shows Trump’s margin nationally among Republicans over Sen. Ted Cruz narrowing, though he still is up double digits, with 42 percent supporting him compared to 29 percent for Cruz and 18 percent for Gov. John Kasich. But in a poll taken last month, Trump was ahead of Cruz by 20 points. 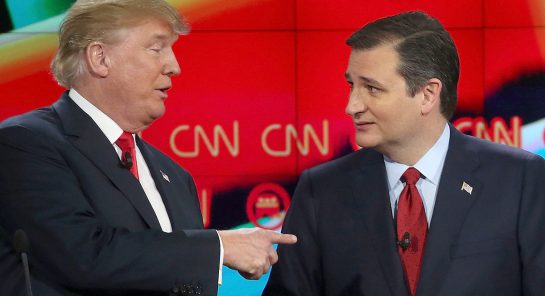 Though many seem to think that if only Kasich dropped out Cruz would be in a position to defeat Trump, the poll suggests that’s not the case. Without Kasich, Trump still leads Cruz by ten points, 48 percent to 38 percent, so the gain for Cruz is fairly negligible, at least nationally.

Six in ten Republicans still expect Trump to be the nominee, down from 77 percent in March, while 22 percent now think Cruz will win.

37 Responses to Trump Backers: If Donald Loses, Bolt the GOP