Former Florida Gov. Jeb Bush scored just 4 percent of the vote in the latest national GOP survey, a catastrophically low number that is sure to raise grave concern among the establishment donors who have invested millions in his success for the 2016 presidential race.

The poll, released Friday by the Pew Research Center, shows Bush slipping into sixth place behind Texas Sen. Ted Cruz, who is at 6 percent. Florida Sen. Marco Rubio, Bush’s archrival for establishment backing, has twice Jeb’s support, with 8 percent. Rubio is tied with Fiorina, whose tally suggests the steam may have run out of the boomlet that accompanied her strong performance in last month’s GOP debate. 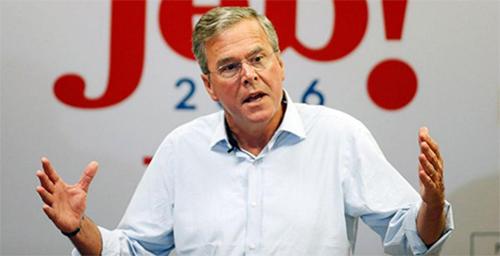 A GOP donor from the energy sector was less than charitable in his assessment of Bush’s campaign this week.

“No one wants another Bush,” said the donor, who asked to remain anonymous. “Hell, when will they get that through their heads?”

Despite numerous hopeful stories in the mean that Donald Trump’s mediocre debate showing had at last inaugurated his decline, the billionaire real estate developer remains well ahead of the field, logging a solid 25 percent, 9 points ahead of Ben Carson’s 16 percent.

Even though he has not yet unleashed his massive advertising war chest against his rivals, Bush — whose 4 percent ties him with “don’t know” — surely did not expect to be where he is at this point. He was long presumed to be the man to beat, but his inability to show much spark or forcefulness on the campaign trail has given Republicans pause.

Meanwhile, he has failed to address the average Republican’s concern about such matters as trade and immigration, leaving the field open for Trump to seize those issues and run away with the base.

Unlike a few other candidates, Bush has so far declined to release his fundraising totals for the third quarter of the year. If those come in lower than expected, the news could further diminish his standing and cause even more donors to consider sending their money to another establishment figure like Rubio.

In the poll, Kentucky Sen. Rand Paul and former Arkansas Gov. Mike Huckabee — strong contenders in the “next to drop out” contest — each received 2 percent. Paul will reportedly reveal that he raised a meager $2.5 million, a tumultuous drop for the $7 million he raised in the second quarter.

A version of the piece first appeared on PoliZette.