Vice President Joe Biden has injected race into the presidential campaign — by linking Donald Trump, the popular GOP front-runner, with xenophobic and racist movements of the past.

The line of attack augers a broader war against Trump and his ideas about immigration, one waged by both Democrats and establishment Republicans that charges Trump is stirring latent intolerance within the GOP.

Speaking during a celebration at the vice president’s residence of Hispanic Heritage Month, Biden charged that Trump was a throwback to the Know Nothing Party, a sometimes violently anti-Catholic and anti-immigrant movement that flourished briefly in the 1850s.

“I want you to remember, notwithstanding the fact that one guy absolutely denigrated an entire group of people, appealing to the baser side of human nature, working on this notion of xenophobia in a way that hasn’t occurred in a long time, since the Know Nothing party at the end of the 19th century.” 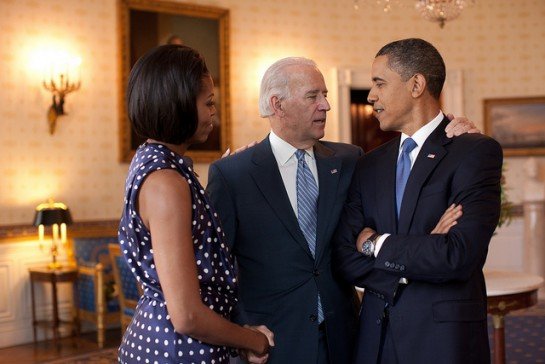 Biden said Trump is offering a “sick message” on immigration, linking him to past racism in America by invoking the 1960s civil rights theme, “We Shall Overcome.”

By invoking past bigotry to a Hispanic audience, Biden is implicitly casting as racist Trump’s wildly enthusiastic backers, who according to polls make up nearly a third of the Republican Party.

Suggestions of intolerance against those concerned about too much immigration from Mexico and Central America are not unique to Democrats. The Wall Street Journal editorial page regularly rings with the charge that nativism animates those who want to slow immigration.

Speaking in 2011 at Southern Methodist University in Dallas, former President George W. Bush suggested xenophobia was driving views not just on immigration, but on trade and non-interventionism in foreign wars as well.

“So if you study the ’20s, for example, there was — there was an American first policy that said who cares what happens in Europe?” he continued. “And there was an immigration policy that I think during this period argued we had too many Jews and too many Italians, therefore we should have no immigrants. And my point is that we’ve been through this kind of period of isolationism, protectionism and nativism. I’m a little concerned that we may be going through the same period.”

Biden’s remarks have the ring of an incipient presidential campaign, for which corralling Latino voters — both in the primaries and the general election — will be critical. And the attack indicates Biden is willing to take the nasty campaign President Obama ran against Mitt Romney in 2012 and double down on the vitriol.

“The American people are decent,” Biden said. “I don’t want anybody to be down right now about what’s going on in the Republican Party.”

Biden seemed to contrast Trump’s message with that of Pope Francis, who visits the United States next week.

Shortly after the GOP debate, “the most popular man in the world is about to come to the United States of America,” Biden said. “Why is he so popular? Because he says, ‘Whatever you do unto the least of my brethren you do unto me.’”

While denigrating millions of Republicans, Biden tried to also cast himself as benevolent, suggesting he wasn’t talking about most in the GOP and that Trump backers would change their views.

“This will pass,” Biden said. “The Trump and that stuff you’re hearing on the other team” isn’t about Democrat, Republican.

Actually, the Republican Party is the majority party, in charge of both houses of Congress.