Scolding the Joy Out of a Beautiful Moment

Something of wonder thing occurred at the White House recently. It may still be occurring, although I haven’t seen evidence of it recently.

A young red-tailed hawk arrived on the grounds. For city folk like me, it’s a glorious thing to see.

I witnessed it the other day on the North Lawn when some smaller birds were chasing the hawk around, perhaps defending their nests. It perched on some tree with a put-upon look, as if of course it had a right to those eggs and weren’t those other mean birds so rude to deny him – or her – a nutritious and tasty meal?

Hawks of course are large, beautiful birds of prey. I tried to take a couple of photos for you but wasn’t successful. The White House, however, was, and posted this exquisite shot. 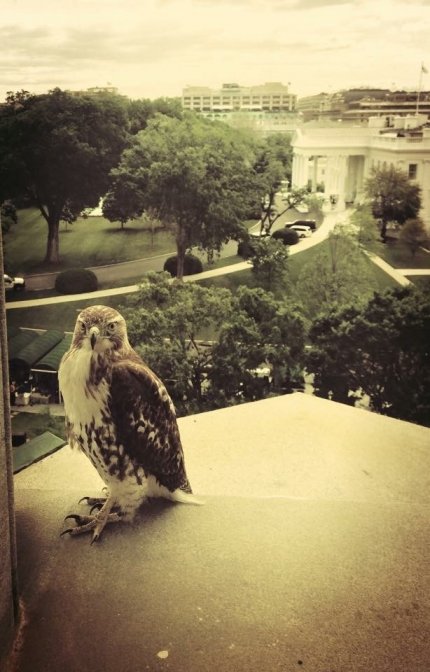 I’ve seen hawks before during my years at the White House, what with the large number of well-fed, fattened-up squirrels bounding about the terrain. The White House squirrels have little fear, because nothing violent ever happens at the White House and they learn people won’t harm them. I remember having one climb up the pant leg of my suit looking to share a Peanut M&M or two with me.

There were times in the past when you knew a hawk was overhead because you saw the squirrels scatter as if one had signaled an air raid warning and the others understood it was time to run, duck and cover. Not always successfully, though, as I have at least once or twice seen a hawk calmly disemboweling a squirrel in Lafayette Park, across from the White House, oblivious to gawking tourists as it savored its meal.

The photo above was included in a White House blog post which naturally celebrated the presence of a splendid visit by the natural world to the urban park that is the White House grounds – actually, it’s part of the National Park system.

Celebrated for a sentence or two, that is. Because the Left can’t just appreciate beauty for it’s own sake. It has to create a “teaching moment,” so often one that instructs in the evil man does and the need for corrective, and hopefully coercive, action by the enlightened among us.

And so of course, the White House left it to one Tamara Dickinson, Principal Assistant Director for Environment & Energy at the White House Office of Science and Technology Policy, to extoll the raptor’s presence. She admitted she was ” enjoying the company” of the bird then went right into finger-wagging mode:

But as we admire and appreciate the animals that have learned to live in our backyards, it’s important to remember that it’s becoming increasingly difficult for much of the world’s wildlife to adapt to the changes that humans are imposing on our shared planet. Consider, for example, the effects that climate change is having on birds. Rising average temperatures, more extreme weather events, and sea-level rise are all forcing bird populations out of their natural habitats and ranges. There’s also strong evidence that climate change induces behavioral changes in birds, altering migration and breeding patterns.

As a result, we’re seeing declines in the populations of many bird species, which will only continue unless something changes. One recent study notes that by the year 2080, around half of the bird species in the United States could lose more than 50 percent of their current range due largely to the effects of climate change.

Really? We know what will happen in 2080 to birds? Climate scientists in the 1990s already incorrectly predicted the weather that would occur over the following 20 years, when it has warmed not at all. And BTW, “extreme weather events” have not been shown to be related to climate change.

It’s our responsibility to do what we can to tackle climate change and take other actions to help protect and restore declining populations of birds and other animals in the U.S. and worldwide. President Obama’s Administration is leading on this front in a number of ways, including unveiling a comprehensive strategy to promote pollinator health and habitat, to supporting the National Climate Assessment to help us identify and respond to the most pressing effects of climate change, to implementing an ambitious series of executive actions under the Climate Action Plan.

Pollinator health? Do hawks pollinate things? What’s that got to do with it?

Can’t we just enjoy this sublime creature without beating ourselves over the head? Do we always have to “learn” from the experience? How about, instead, learning to experience.

25 thoughts on “Scolding the Joy Out of a Beautiful Moment”