The March of Progress – aka the gradual intrusion of government into every possible corner of your life – is somehow being slowed a bit as the Obama administration puts on ice plans to provide government ratings for colleges.

The Education Department blog says an evaluation of higher education centers of learning, to be released today, will, “take a more consumer-driven approach than some have expected, providing information to help students reach their own conclusions about a college’s value,” which, according to the Wall Street Journal, means no actual ratings.

Now, as the WSJ mentioned, the gray part of this silver lining is that we won’t get to see academics suddenly victims of the very left wing dogma they are drilling into our young people, forced to cope with the same government chimera they are helping to create. While it would have been delightful to savor these just desserts, the price to liberty would be just too high. 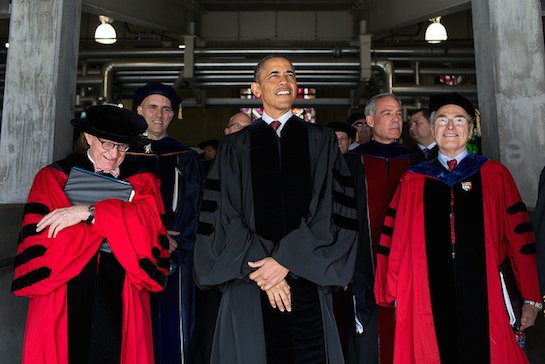 Because imagine how this was to go down. The Education Department was to give its USDE Grade of Approval to individual universities. Universities with poor grades would experience less demand from students for an education, and perhaps fewer donations from alumni aghast that their alma mater was not up to federal snuff.

So, of course, these universities decide they must start aggressively kissing some federal government booty, doing whatever the government requires in terms of creating diversity, structuring a curriculum, and providing a warm, loving environment – but not too loving less someone claim they are being assaulted.

You get the picture. These ratings are a backdoor entrance to federal control over higher education.

Supposedly, the Obama administration backed down in the face of the objections from what are usually its allies in academia. But I’m hardly convinced this is over. The temptation to control the minds of our college-age youth, as the federal government is already doing with their younger counterparts, is too great. I mean, it’s what average Socialists are permitted to do in normal Socialist societies.

Teach the people to read. And then give them something to read.