It’s accepted always as a given in Washington that “gridlock” is a terrible thing and that our elected leaders need to do better at “getting things done” and “working together.”

Because we are a nation of doers. “What do you do?” is our way of saying “Who are you?” One of the more pathetic laments you can hear from someone is, “I didn’t get anything done today.”

And so, supposedly unbiased articles by journalists will mention the “problem” of gridlock and the terrible “inertia” in Washington.

Never mind that the Founders, envisioning limited government, created checks and balances and intentionally made it difficult to get anything done in Washington. Because what they feared more than anything else was the can-do spirit taken too far by power-hungry individuals certain of their views.

It occurrs to me that none of this had occurred to Chris Christie – who reminds me in every respect of a bully who probably shouldn’t be entrusted with power – as he announced his presidential run.

For Christie, the imperative is getting things done. And both Republicans and Democrats are hapless fools, compared to him, whose disagreements are harming the nation.

And this, this dysfunction, this lack of leadership, has lead to an economy that is weak and hasn’t recovered the way it should. It’s lead to an educational system that has us 27th in the industrialized world in Math and 24th in science. It’s lead us, it’s lead us to weak leadership around the world where our friends no longer trust us and our adversaries no longer fear us.

Really? Did Christie want more “leadership” so that Obama and the Republicans would spend more and raise taxes, or try to put people in homes who can’t afford them – the government policy that caused the last recession? Does he want more federal control over education?

It seems to me there’s been plenty of compromise and leadership, which has led to $18 trillion in debt, entitlement programs headed for bankruptcy, a government takeover of health care, and a welfare state driving millions into hopelessness. 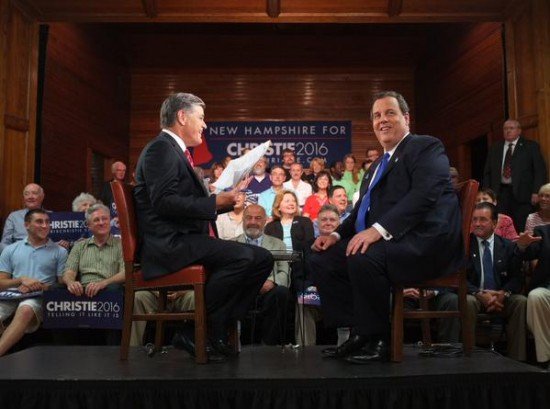 This country is in very deep doodoo. It needs radical restructuring, not more compromises that allow the system and its ills to continue to metastasize. Leadership is about selling major changes to the American people, not bringing legislators together just for the sake of it.

The tax and spending cuts needed must embark us on a whole new direction. I’m not really hearing any of the GOP candidates talking about the short-term pain that will be involved in taking back the much-too-much that has been given by the government, and turning things over to the private sector for the long-term benefit of all.

If Christie wants to lead, he can warn America of the trouble that’s coming. Not talk about compromising with Bernie Sanders.

And that will take running up Republican majorities in Congress and finding a few Democrats to pick off, not broad compromise. Because the Left is too entrenched, too ideological, and will never roll back its success creating a government leviathan – achieved through compromise.

H/T to Washington Examiner for the video.