Obama: We Have Common Values with Brazil; Similar History

During his press conference at the White House Tuesday with Brazilian President Dilma Rousseff, President Obama asserted that Brazil and the United States are “similar.”

A lot of people wouldn’t have noticed this, but Jim Hoft of Gateway Pundit did. And it’s a serious part of the problem with Obama.

Our common values, the strong people-to-people relations that we have, the fact that we are the largest countries in the hemisphere with similar histories — I think all that means that we should be very strong partners for years to come.

Similar histories? Does this sound like your history? From the New York Times’ “Brief History of Brazil:”

Pedro had ideas of his own: he proclaimed Brazil’s independence on September 7, 1822, and established the Brazilian empire. Nine years later, following a period of internal unrest and costly foreign wars, the emperor stepped aside in favor of his five-year-old son, Pedro II. A series of regents ruled until 1840, when the second Pedro was 14 and Parliament decreed him “of age.”

Brazil has spent its history rocking back and forth from monarchy to military juntas to a republic and back. For now, it’s a republic.

Sure, Obama was in part playing a little mood music to make Dilma think the American people love Brazil for something other than Pelé and Brazilian nuts, which aren’t particularly popular, BTW. But that he could even say such a thing speaks voluminously about his attitude toward his own country. 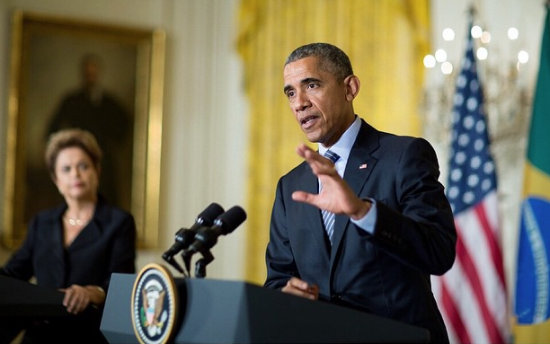 Obama thinks our culture is malleable, changing all the time, moving forward, and so on and so forth. He had to force himself during his presidency to say he is an American exceptionalist, because actually he is not.

And of course, all cultures being equal, what harm can it do to permit millions of people from one country, Mexico, to flood into the America over just a few short years. Change is good!

Here are some of the similar Brazilian values to ours.

Uh, on second thought, it does look kind of like our culture.

Maybe it is in fact too late to preserve the Western Europe-based value system that guided this country to its preeminence. Sure, spiced up by other cultures, including that of my ancestors – Jewish immigrants from Eastern Europe.

But not supplanted by other cultures. And not even “similar” to them.

18 thoughts on “Obama: We Have Common Values with Brazil; Similar History”