President Obama Wednesday announced a new policy regarding U.S. hostages that is designed, albeit not purposely, to get more Americans kidnapped and killed.

The policy, in short, is that while the government still may not ransom hostages, private citizens can – even though it’s against the law – and will be aided by the government in their “communications” with the terrorists.

Obama said as much during an appearance at the White House, and White House Press Secretary Josh Earnest said it was only “likely” that the administration would at least try to dissuade families from paying ransoms and did not deny a reporter’s statement that the government was giving its “tacit approval” to the practice.

The policy against ransoming hostages was a sound one based on something the Obama administration doesn’t understand – economic incentives. That is, if you pay someone after they kidnap Americans, the first principle of economics states that they will therefore be incentivized to repeat the practice in order to earn more money.

But private sector economics, whether practiced by U.S. corporations or Islamist barbarians, is beyond the comprehension of the Obama administration folks. 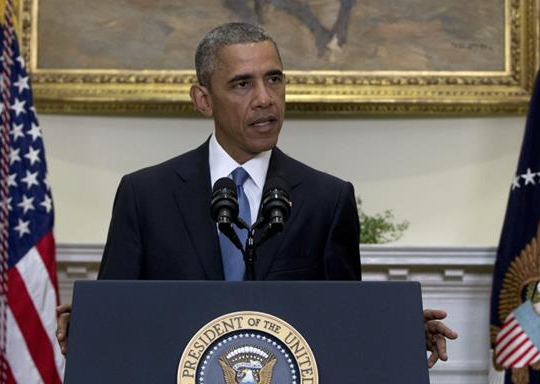 How, please, to explain a policy that prevents the government from ransoming hostages but allows private citizens to do it? Is money provided by the government qualitatively different in some way than that given by individuals? Does a dollar of money from the Treasury buy more suicide vests, IEDs, plastic explosives, and beheading knives than a dollar from John Q. Smith?

One of the ways this tragically misconceived policy came about was that the hostage families apparently kidnapped the president, as Obama revealed today:

I’ve called these families to offer our condolences after they’ve received gut-wrenching news no parents ever want to hear. I’ve visited with them. I’ve hugged them. I’ve grieved with them. I just spent time with some of the families, as well as some former hostages here at the White House. And needless to say, it was a very emotional meeting. Some are still grieving . . .

As I said to the families who are gathered here today, and as I’ve said to families in the past, I look at this not just as a President, but also as a husband and a father. And if my family were at risk, obviously I would move heaven and earth to get those loved ones back.

If Obama cannot stop his emotions from getting the best of him, with the result that he emits emotion-driven, irrational policy, then he needs to stop meeting with hostage families.

And soon he’s going to be meeting with even more of them.

And BTW, he needs to “look at this” a lot less “as a husband and a father.” Because his personal family feelings are not really relevant to hard-headed national security policy decision making.

This kind of sappiness is exactly what got Ronald Reagan into the Iran-Contra crisis. Reagan got too emotionally attached to U.S. hostages controlled by the Iranians and ended up trading arms for them. And the minute someone was released, more hostages were taken.

Please explain how these comments by Obama make sense:

At the same time, we are clarifying that our policy does not prevent communication with hostage-takers — by our government, the families of hostages, or third parties who help these families. And, when appropriate, our government may assist these families and private efforts in those communications — in part, to ensure the safety of family members and to make sure that they’re not defrauded . . .

In some cases, families feel that they’ve been threatened for exploring certain options to bring their loved ones home. That’s totally unacceptable . . .

In particular, I want to point out that no family of an American hostage has ever been prosecuted for paying a ransom for the return of their loved ones.

So we’re against ransoming unless we’re for it.

See if you can make any sense of Homeland Security Advisor Lisa Monaco’s attempt to resolve the contradiction in U.S. policy. Actually, she doesn’t even try.

Note too how casually Obama, now that he’s done it several times, announces that a statute simply will not be enforced. It’s against the law to ransom hostages, but you’ll never see the inside of a courtroom if you do it.

Obama’s willlingness to loudly and repeatedly ignore laws sets a dangerous precedent that will no doubt mark the rest of his tenure and probably that of his successor, perhaps even whether that person be a Republican or Democrat.

The viability of the republic rests on the existence of honorable men and women to uphold it and an obedience to the rule of law. Both are now in dangerously declining supply.