In a preview, perhaps, of the post-presidency lifestyle President Obama intends to lead, Obama had dinner Thursday with film moguls Stephen Spielberg and Jeffrey Katzenberg.

“This was at the hotel, on his private time, a social occasion, unrelated to his official obligations are president,” said Schultz.

Well, when the president of the United States has dinner with two of the most powerful people in an industry – the movie industry – and two mega-Democratic donors, then it is not just fun times with the guys, and the press should know about it.

But secrecy seems to be an increasingly common hallmark of this presidency as it winds down and its occupant really gives less and less of a S&%* what anybody thinks.

Meanwhile, the president appeared on some program called “WTF with Marc Maron.”

I don’t know. I don’t have the cleanest mouth in Northern Virginia, but should a president really associate himself with shows bearing such titles? Do we not want to preserve some elevated sense – and with it, authority and respect – regarding the highest office in the land?

“I can tell you it was a very candid, extended conversation, about an hour,” Schultz said. The president had an opportunity to reflect on not only the issues of the day but much more his approach, his perspective, “how his upbringing informs his decision making.”

At least maybe there will be something interesting coming out of an unconventional interview. Maron posted an photo to his Instagram account titled, “The president forgot his coffee.” 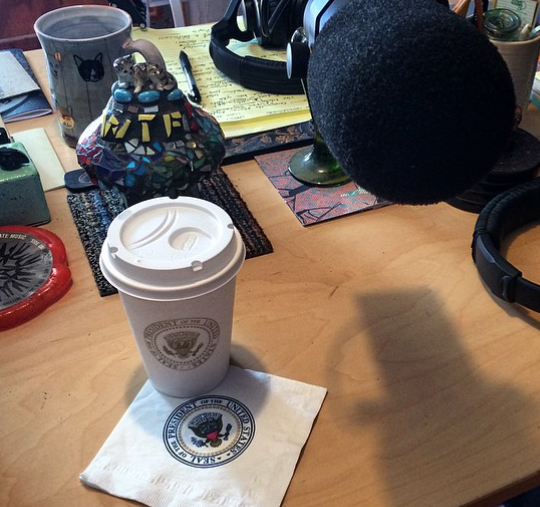 50 Responses to Obama Has Secret Dinner with Spielberg, Katzenberg