Why No Presidential Statement on Garland?

More than a week after an attempted terrorism attack in Garland, Texas that could have killed dozens of citizens had it succeeded, there has been no statement of condemnation from the president.

What exactly does this lack of seriousness about the attack say to those planning future assaults against U.S. targets and free speech? The White House response should have been sure, bold, and unequivocal, even if President Obama didn’t like the message of the group that was attacked.

ISIS, whelped in the vacuum of a irresponsible U.S. withdrawal from Iraq by Obama, now presents a grave danger to the United States.

While perhaps not directed by ISIS, the attacks appear more closely linked to the organization than just random inspiration. One of the attackers, Elton Simpson, “appears to have been part of a network of Islamic State adherents in several countries, including the group’s hub in Syria, who have encouraged attacks and highlighted the Texas event as a worthy target,” the New York Times wrote today. 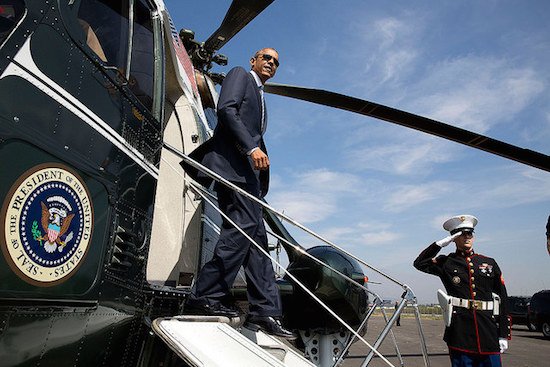 The Garland event, which featured a Muhammed drawing contest, was no doubt provocative. But speech that must be protected is always provocative. And the contest was at least as much an effort to lay down a bold red line stating that free speech will not be abridged by the emotions of radicals.

As a Jew, I recognize I’m just going to have to live with it if someone wants to plaster on a Charlie Chaplin mustache and go goose stepping down the sidewalk with his arm raised high in salute.

Instead of a statement by the president, we got the weak tea of offhand comments by White House Press Secretary Josh Earnest, who said:

There is no expression, however offensive, that justifies an act of terrorism or even an act of violence. And that apparently is what these two individuals in Texas were trying to do. They were responding to one form of expression that they found offensive, and tried to use that as justification to carry out an act of terror.

And that is something that the President has repeatedly and consistently condemned. And this is a firm principle that we’re going to protect when it comes to the freedom of expression, and freedom of press, and freedom of speech.

Well, hopefully ISIS was watching the briefing on CSPAN.

One cannot help but think that were a group Obama were in sympathy with attacked in this way, we would have heard from the president. Imagine if two white supremacists sought to shoot up a meeting of the NAACP. The president would be all over it, leading all of us in an expression of outrage and intolerance of future such attacks.

Free speech is free speech, and terrorism is terrorism. The president ought to be on it, no matter his personal feelings.

On a lighter note, another Muhammed drawing contest for your perusal.

57 thoughts on “Why No Presidential Statement on Garland?”