Really? Obama Has “Scratched and Clawed” for the Middle Class?

One moment of unintended – and unnoticed – levity occurred near the end of the White House briefing Tuesday, when White House Press Secretary Josh Earnest claimed that President Obama has been “a president of the United States that for the last six and a half years has scratched and clawed to protect the interests of middle-class families all across the country.”

Not sure about who or what he has scratched and clawed. Because the markings are difficult to discern.

You can agree or disagree with Obama’s methods and policies. But his chief enthusiasm has been helping the lower classes by expanding the welfare state and regulating businesses. The middle class stuff is camouflage for the real agenda.

Barack Obama enters the final two years of his presidency with a blemish on his legacy that looks impossible to erase: the decline of the middle class he has promised to rescue.

Federal Reserve survey data show families in the middle fifth of the income scale now earn less and their net worth is lower than when Obama took office.

In the six years through 2013, over the recession and recovery that have spanned Obama’s tenure, jobs have been added at the top and bottom of the wage scale, a Reuters analysis of labor statistics shows. In the middle, the economy has shed positions – whether in traditional trades like machining or electrical work, white-collar jobs in human resources, or technical ones like computer operators.

Between 2010 and 2013, as recovery took hold and stock markets soared, the average net worth of families in the top 40 percent of income earners grew. For all others average net worth shrank, declining 19 percent for the middle fifth.

These results stem from specific policies. Obama’s chief domestic initiative, Obamacare, is not a middle class program. It’s an effort to get health insurance to the lower class, including a massive expansion of Medicaid. Expanding health insurance is a good goal, but the way he has done it involves turning insurers effectively into wards of the state and raising the price and lowering the quality of healthcare for everyone else.

Among his other battle cries are raising the minimum wage and legalizing illegal immigrants. He pushed and signed legislation containing massive new regulations on the banks, wants to regulate carbon emissions by fiat, and has enlarged the government’s share of the economy while running up trillions in debt. 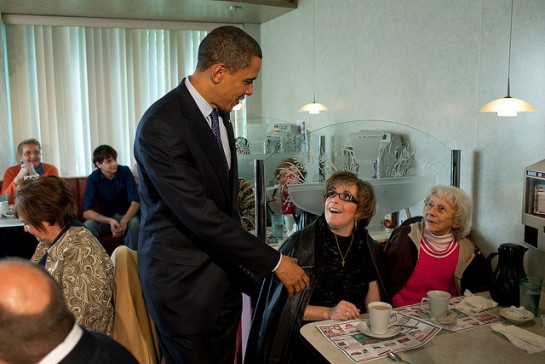 Meantime the WEALTHY have benefited during Obama’s tenure for the zero-interest rate Fed policies needed to keep the economy afloat in the absence of any serious presidential leadership on expanding the economy. The low rates have grandly goosed everyone’s stock portfolios and made the rich richer.

These things he scratches and claws for. Not private sector expansion and business-friendly policies that would promote middle class expansion.

And the results speak for themselves.

40 thoughts on “Really? Obama Has “Scratched and Clawed” for the Middle Class?”

6:40 pm || With the first lady, participates in the Salute to America; South Lawn