What if there were a federal program devoted mainly to white people? What would everyone say about that?

I’m sorry to be the tarantula in the sleeping bag here, but I’m not too excited about President Obama’s My Brother’s Keeper initiative, or its expansion into the private sector with a new corollary group that will run on corporate donations. And not because I don’t think the goals are worthy.

Obama’s desire to help black and Latino youths is tremendously laudable. Solving the problems of disadvantaged youths and the culture they must inhabit is one of the great issues of our time. But this is not the way to go about it.

Appearing in the Bronx Monday, Obama announced that that program, which seeks to remove obstacles from the paths of young men of color – unless they’re Asian – would be his life’s work. Starting now.

I grew up without a dad.  I grew up lost sometimes and adrift, not having a sense of a clear path.  And the only difference between me and a lot of other young men in this neighborhood and all across the country is that I grew up in an environment that was a little more forgiving.

The My Brother’s Keeper initiative, you’ll remember, was started soon after Obama saw himself in Trayvon Martin. But a president has to step outside himself, because he and the government have purview over us all.

I do not believe that a government, or a president, should be focused on one race or creed over another. All people are equally deserving of whatever government policies are designed to help the poor. 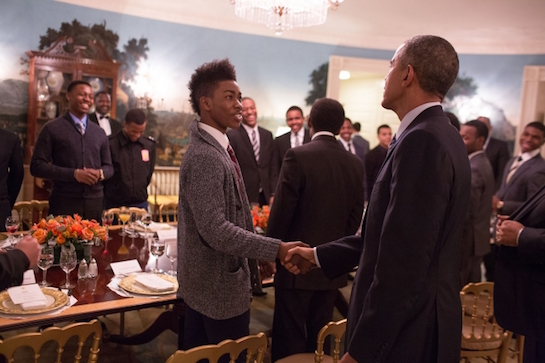 I do understand that there are strategies for combatting poverty that are particular to the black or Hispanic communities. But when government emphasizes the plight of one group over another, based on the color of their skin, it puts us on a slippery slope toward racial divide. Which is exactly where Obama, with his constant focus on race – and his alliance with all the race-baiting canaries in the coal mine of oppression – has placed us.

This has become a time of racial tension. I’m not sure it had to be that way.

I might be supportive of certain color-blind initiatives to help the poor. If within that there are particular policies tailored to one group or another, fine. That’s not a technicality. It’s a crucial distinction.

What Obama has done is launch race-based governing. It’s a dangerous precedent, even if in pursuit of a worthy goal.

The White House claims that this new private entity will operate in some alternate universe from the president, where corporate donors drop money into the program out of unadulterated altruism and the White House is unaffected by the knowledge that the Wendell Wilkie Widget Works Corporation donated $5 million to Obama’s dearest cause and now wants widget safety standards slightly reduced.

Maybe the Obamas will ask the Clintons for some advice on how this is all going to work.

50 thoughts on “My Brother’s Wrong Keeper”