Obama Must Honor Armenia’s Suffering by Calling it a “Genocide”

President Obama claims to be guided by morality and what he thinks are “American values” in his conduct of foreign policy.

Unlike many conservatives, particularly conservative commentators, I actually believe that Obama is doing what he thinks is right. Even if Obama would not extend that particular article of faith to his conservative opponents.

Now, I do believe that some of what he does amounts to rationalizing weakness – inaction, concessions, and reversals of promises – parading it instead as a morally superior and “practical” approach. And I think much of what he decides is good policy is, to the contrary, bad policy – inconsistent with our values and gravely injurious to the nation.

But I believe he is doing what he thinks is right.

However, Obama cannot even claim to seek the “moral path” in foreign policy if he fails to do what he promised during the 2008 campaign, and that is call the genocide committed by the Turks against the Armenians what it is: a genocide.

Friday marks the 100th anniversary of beginning of the slaughter, which killed more than a million people. The massacre was directed by top government officials, one of whom, according to historian Dominic Green, “installed a personal telegraph office in his home so that he could direct” those committing the murders “and keep count of the killings.”

Green described the genocide and its roots in an article published this week in the Weekly Standard:

In 1914, some two million Armenians lived in Ottoman Turkey, three-quarters of them in six provinces of eastern Anatolia, on the borders of Russia and Persia. By 1918, 90 percent of them were gone. More than one million were either murdered in their towns and villages or killed by disease, starvation, or death marches into camps in the Syrian desert, where the survivors were massacred. Hundreds of thousands of women and children were forced to convert to Islam; tens of thousands fled to the Russian Caucasus as refugees. Yet to this day, the Turkish government claims that there was no genocide and that it was the Armenians’ fault.

Obama’s moral failing here is consistent with that of previous presidents, all of whom have been frightened to anger Turkey, which is a member of NATO and supposedly a key ally in the Middle East, where we have few allies.

Here is the supreme, awful irony: The United States does not recognize a “genocide” because the nation that committed the genocide objects. 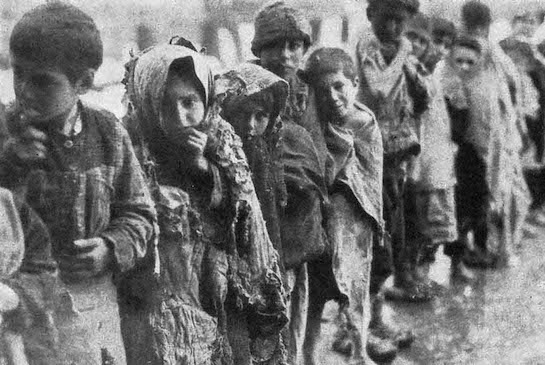 It is time for the cravenness to stop. It is time to remember that the United States is the most powerful nation in the history of the world, and to start acting like it. Third-rate powers like Turkey actually do need us more than we need them. The United States, through NATO, is committed to defending Turkey should Russia or anyone else try to mess with it. So let the ass-kissing come to an end.

It’s worth remembering at this point that despite pleas from the Bush administration in 2003, Turkey refused to grant the U.S. access to its territory and ports, critically needed staging areas for the war with Iraq. And Turkey has become increasingly Islamacized in the years since, despite blankets of flattery and cajoling heaped on its leader by Obama.

Turkey will throw a fit if Obama says Armenia suffered a genocide. But Turkey will get over it. And Turkey doesn’t give us much help, and can do us little harm.

Unfortunately for the Armenians, they lack the kind of strong political muscle that could balance the scales for a politician like Obama and get him to do what is morally right.

So he’ll have to just come to the conclusion himself.

The White House has put out word that there will be no use of the word genocide Friday when Obama marks the anniversary. Obama can still change his mind and say what must be said. I think he is capable of doing it.

Below is a video of UN Ambassador Samantha Power in 2008, seeking votes for Obama from Armenians by assuring then that with respect to the genocide, she is certain of Obama’s “willingness as president to commemorate it, and certainly to call a spade and spade and speak truth about it.” She added, “I know him very well and he’s a person of incredible integrity . . . he’s a person who can actually be trusted.”