Obama Prepares to Give in to Iran, Again

One thing the Iranians surely figured out a long time ago is that President Obama will never bomb them. And so they negotiate accordingly.

What they have also noticed is that, this late in the “process,” there is virtually nothing the president won’t accept or do to get a deal.

Within days of hearing Iran’s demand that sanctions be lifted immediately, rather than in a phased way to award good behavior, Obama’s knees began to tremble, and Friday he collapsed to the floor of the East Room and caved in.

Watch a presidential caving happen below! From his press conference with Italy’s prime minister:

I would just make a general observation, and that is that how sanctions are lessened, how we snap back sanctions if there’s a violation, there are a lot of different mechanisms and ways to do that. Part of John’s job and part of the Iranian negotiators’ job, and part of the P5+1’s job is to sometimes find formulas that get to our main concerns while allowing the other side to make a presentation to their body politic that is more acceptable.

Our main concern here is making sure that if Iran doesn’t abide by its agreement that we don’t have to jump through a whole bunch of hoops in order to reinstate sanctions. That’s our main concern. And I think that goal of having in reserve the possibility of putting back and applying forceful sanctions in the event of a violation, that goal can be met. And it will require some creative negotiations by John Kerry and others, and I’m confident it will be successful.

So the signal is very clear. As long as we can “snap” the sanctions back on, we may be able to lift them pretty quick!

But how are we going to get the Europeans and others to cooperate? And what will be the Red Line? If, for example, Iran cheats a little, or messes with the inspectors, is Obama really going to throw the sanctions back on them? And then take them off and put them on again? It’s just not a real-world solution.

But the real world has never been the critical element when it comes to Obama’s approach to Iran.

This was originally supposed to be a deal to dismantle Iran’s nuclear program. Well, the Iranians weren’t going for that, and so Obama abandoned such thinking. 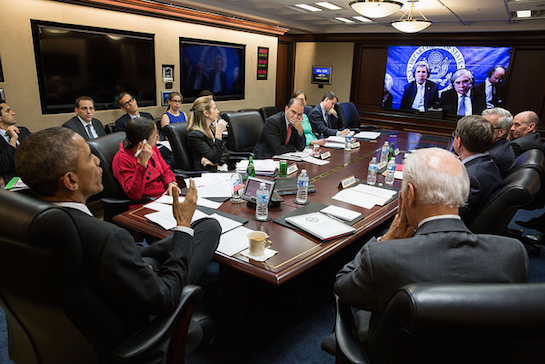 According to the Wall Street Journal, White House officials are “whispering to reporters” that Iran could immediately accrue $30 billion to $50 billion once sanctions are lifted and they get access to frozen offshore accounts.

This will amount to a bonanza for their efforts to spread their power throughout the Middle East and, yes, build a nuclear weapon.

You see, the administration keeps repeated that “you can’t bomb knowledge” as an explanation for effectively rejecting the military option against Iran. But this is a red herring, pickled and filleted for the consumption of the American public.

Knowledge is not the critical variable here. The recipe for building a nuclear weapon can be found on the Internet. The roadblocks are logistical. It requires money, access to technology and so forth.

Thoroughly bombing Iran’s nuclear program, along with a stringent sanctions regime, would not necessarily be “reversible in two or three years,” as is routinely stated. Iran would have to reconstitute what has taken it decades to construct. It would need renewed access to materials and technology and then the ability to rebuild without being noticed. This would be a very difficult, if not impossible thing to achieve.

Obama’s $50 million gift will ensure that Iran can do everything possible to stealthily cheat on a deal and be ready to ramp back up as quickly as possible once they’ve been caught or decide to simply walk away from the agreement, as the North Koreans did.

But the military option is off the table. As are all other options, other than the option of reaching an agreement.

20 thoughts on “Obama Prepares to Give in to Iran, Again”