The White House Thursday turned its vicious invective on one of Washington’s longest serving, most respected and most honorable senators, Republican Chuck Grassley of Iowa, branding him as dishonest.

In September, Grassley said, “Rather than rush a nominee through the Senate in a lame duck session, I hope the President will take his time to nominate a qualified individual.”

Then Thursday, talking about Loretta Lynch’s lengthy confirmation process, Grassley said, “If you want to subtract November and December from that long time frame, you should do it.  The Democrats were in control of the Congress and they decided not to bring her up.”

Earnest attacked, calling it “exhibit A in why it is very challenging to work with congressional Republicans.”

That, in my mind, is an astounding display of duplicity.  And I know that it may be that you guys are looking at me — many of you have been in Washington longer than I have — and you’re thinking:  That Josh really likes working at the White House, he’s so idealistic, he’s got stars in his eyes, he’s so naive about the way that Washington works; that this kind of dramatic reversal and going back on one’s word is just business as usual in Washington.

The sad part, I think, is that Senator Grassley — particularly in his home state of Iowa — has cultivated a reputation as somebody who is true to his word.  And I think the only conclusion that I can draw from this astounding exchange is that it’s possible that Senator Grassley has been in Washington for too long.

Earnest needed a pretext for an attack on Republicans, but he could have at least chosen one that made sense. Grassley may not have wanted Lynch to be considered during the lame duck session. But it was still the Democrats’ choice not to bring her up. So she wasn’t considered then, and the period should be subtracted from the confirmation process, Grassley said. Where’s the duplicity? 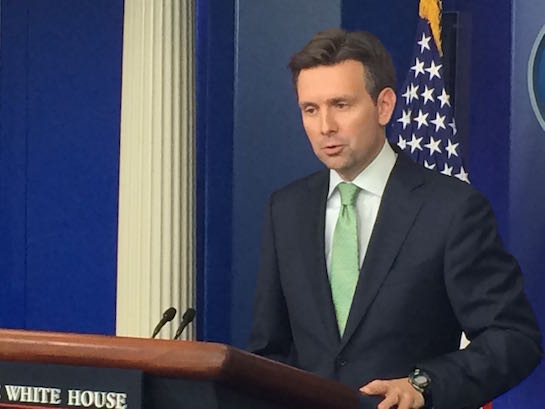 What’s really going on, of course, is the deployment of repellent political tactics. As I noted yesterday, Saul Alinsky is still the prophet  of choice for the Obama White House: “Pick the target, freeze it, personalize it, and polarize it,” Alinsky wrote.

The superb irony here, of course, is that while the White House was charging duplicity, it was revealing its own. From the president on down, the White House regularly protests that it wants only to work with Republicans and to cast the rancor and partisanship aside.

And then it goes and for no particular reason unleashes a nasty attack on an 81-year-old senator.

I really have to give the White House credit. They’ve turned disingenuousness into a work of art.

One reporter called Earnest on the inconsistency, prompting a sneer.

Question: You referred to Senator Chuck Grassley as “duplicitous.” Is that helpful –

MR. EARNEST: I referred to his comment as duplicitous. But, yes.

MR. EARNEST: I’ll just observe, John, that being nice has gotten us a 160-day delay. (Laughter.) So maybe after they look up “duplicitous” in the dictionary we’ll get a different result.