Everything in the Obama White House starts late, including Obama.

The White House announced today that it is open to completing the deal with Iran at least a day late. Because that’s how we roll around here.

Tardiness actually has the unfortunate effect of revealing underlying unseriousness, inattentiveness, a lack of discipline, and a penchant for screwing things up. 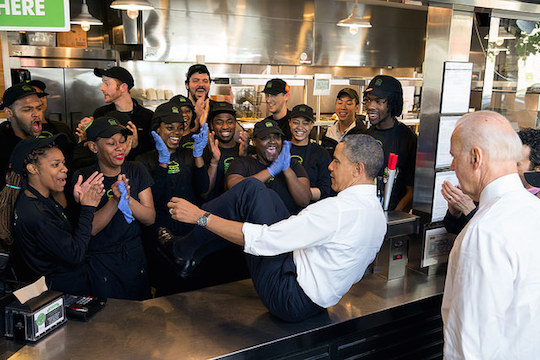 It says something about the place that the above is actually an official White House photograph, released to showcase your president’s behavior.

Whether it is President Obama’s failure to enforce his red lines, his post-passage changes to Obamacare, his failure to remove Bashar Assad as promised, his claim that Yemen was a success case before it fell apart, his Obamacare website fiasco, and so on, and now, his willingness to breach the March 31 deadline for a nuclear deal, Iran has surely noticed it is dealing with amateurs. It knows it can get away with a lot, both before and after a deal is finally signed. And it will.

While being late ostensibly allows “vital matters” to be concluded before showtime, tardiness actually has no use. Someone who is late will tarry whether they have to get to an appointment 20 miles away or across the street. They’ll be the same 15 minutes late, no matter their point of disembarkment or their destination.

The daily White House briefing rarely starts less than 20-25 minutes after its appointed hour, for example. On March 19, White House Press Secretary Josh Earnest was an hour later than the original announced time, without apology. They’d announced a half hour delay in the morning and then came out another half hour late.

Last Wednesday, Earnest was 45 minutes late: “I apologize for the delay in getting started this morning. A lot going on,” he said. See my point?

Never saw anything like that at the White House, even with Bill Clinton, who was also late for everything.

The leaders of Iran and the rest of the Middle East live in a deadly serious neighborhood. They all sense that they are not dealing with a reliable entity in the Obama White House and are taking matters into their own hands.

The Arabs are creating an Arab fighting force, which will no doubt prove feckless and require cleaning up after by the United States. Israel will, with respect to Iran, be forced to go it alone and do a far less efficient job with the “military option” than we would. And the Iranians will attempt to dodge and weave their way to a nuclear weapon while spreading their malign influence into areas of the Middle East where we have withdrawn.

Because there does not seem to be a grand vision coming out of the White House. No systemic policy. No reliable commitments. Actually, under whatever the Obama Mideast doctrine is, the whole damn place is has become an utter mess, one that will soon be littered with atom bombs.

Because lateness is not a disease. Lateness is a symptom.