President to Play Golf While Fate of World Decided

It’s the final, tense days of 18 months of negotiations over one of the most critical treaties of modern times – the terms under which Iran will either be permitted or not permitted to obtain a nuclear weapon.

It will be permitted to obtain one, but stick with me here.

The president’s emissaries, led by his Secretary of State, are in Switzerland feverishly negotiating the final details, hoping to ensure the toughest bargain possible to prevent the advent of an historic new peril to the world: Nuclear weapons in the hands of Iran’s crazed Islamist theocrats.

The president this weekend will be hunkered down in the Situation Room, in constant touch with his envoy, issuing last-minute orders and ensuring that his careful instruction are complied with and none of his red lines are crossed.

This just in now from the “pool” reporters covering the president:

On a sunny and beautiful, if chilly morning, the president left the White House residence at 9:30am, wearing a light blue button-up shirt with no tie, a navy blazer and khaki slacks.  He waved to the pool but didn’t respond to your pooler’s shouted question about the new Indiana religious freedom law.  The president got into Marine One . . . The helicopter was wheels-up to Joint Base Andrews at 9:34am. Handing over now to the travel pool . . .

Marine One touched down at Joint Base Andrews at 9:41 a.m. POTUS bounded down the steps at 9:45. We’re headed for warmer climes. Up the AF1 steps moments later. You can tell this is a non-work trip (because) someone forward of the press cabin ordered 3 beers at 9:26 am.

Obama is headed to the Floridian golf club in Palm City for two days of golf, according to local news outlets. Not that he didn’t just have a golf extravaganza in California last month.

This is beyond appearances, symbolism, optics, and so forth. This is a genuine statement about the care, attention and seriousness being given the Iran nuclear issue, perhaps the gravest problem confronting the United States and, indeed, the world. 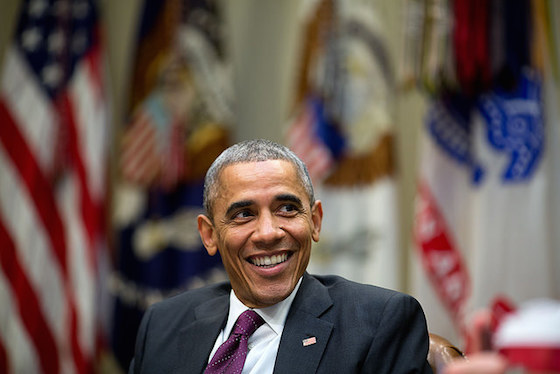 It is not possible to completely compartmentalize your life. When you are on vacation, there is a different attitude that takes hold, one that doesn’t want to be bothered with too many details or critical issues. It is not merely disgraceful that the president is on a golf junket this weekend. It’s frightening.

If Ayatollah Khamenei is out playing golf or shuffleboard or competing in a backgammon tournament or whatever the Hell they do over there for recreation, I’d be very surprised.

This deadline for a nuclear deal has been scheduled for many months. This is no surprise.

Neither, sad to say, is Obama’s choice of priorities.