How Obama Lost Iraq and Allowed ISIS to Bloom

President Obama is playing his customary Blame Bush card, trying to heave the Iraq catastrophe, featuring the ISIS caliphate, onto his predecessor.

“ISIL is a direct outgrowth of al Qaeda in Iraq that grew out of our invasion,” Obama said in an interview with VICE News released Monday. “Which is an example of unintended consequences. Which is why we should generally aim before we shoot.”

I suppose, if you try hard enough, you can find a way to blame the British or the Ottomans for ISIS. But the fact is that Obama was handed a stable Iraq by George W. Bush, who had real reasons to go into country, including what everyone thought was accurate intelligence that Saddam Hussein possessed weapons of mass destruction.

A piece in the November/December issue of Foreign Affairs by Rick Brennan, a senior civilian adviser to the U.S. military in Iraq from 2006 through the end of 2011, lays out exactly what happened. It makes several things clear:

Let’s walk through the argument together.

The 2008 agreements negotiated by the Bush administration with the Iraqis called for U.S. troops to leave Iraq by the end of 2011. The deal was the best Bush could get at the time and was always intended to be renegotiated, which is exactly what Obama was supposedly trying to do.

Military planners believed about 24,000 troops would need to remain in Iraq to maintain the peace, which had been achieved with enormous U.S. blood and treasure, and to continue to prepare Iraq to secure the the place on its own.

Otherwise, disaster would engulf the country. Al Qaeda in Iraq, which had been defeated, was nevertheless licking its wounds in Syria and rebranding itself. It could return. Withdrawal by the United States would also provide an opening for Iran in Iraq.

The military planners’ scorecard made one thing perfectly clear: by 2011, enough information was available to conclude that absent a significant U.S. military presence, within a few years, the situation in Iraq was likely to deteriorate — perhaps irreversibly.

The Iraqi military, for example, was still three to five years away from being able to independently sustain the gains made during the past four years.

All of this turned out to be correct. ISIS was not specifically seen, though with substantial U.S. troops in Iraq, it likely would have been noticed:

Had a residual U.S. force stayed in Iraq after 2011, the United States would have had far greater insight into the growing threat posed by ISIS and could have helped the Iraqis stop the group from taking so much territory. Instead, ISIS’ march across northern Iraq took Washington almost completely by surprise.

Obama was having none of it.

In April (2011), Obama directed (U.S. forces in Iraq commander General Lloyd) Austin to develop a plan that would result in a residual force of just 8,000 to 10,000 troops and to identify the missions that a force of that size could realistically accomplish.

In August, according to (then-U.S. ambassador to Iraq James) Jeffrey, Obama informed him that he was free to start negotiations with the Iraqis to keep 5,000 U.S. service members in Iraq: 3,500 combat troops who would be stationed on yearlong tours of duty and 1,500 special operations forces who would rotate in and out every four months.

As we know, Obama reached no deal for a continued U.S. troop presence. The president blamed the prospect of Iraqi legal purview over U.S. forces serving in the country.

Let’s talk about this.

Few realize that this would have simply maintained the status quo, which Bush had felt worth the risk when compared to squandering all our gains:

Washington had to drop its insistence that U.S. forces enjoy complete immunity from Iraqi law. Instead, in somewhat ambiguous terms, the agreement gave Iraqi authorities legal jurisdiction over cases in which U.S. service members were accused of committing serious, premeditated felonies while off duty and away from U.S. facilities.

In his memoir, Duty, published earlier this year, former U.S. Secretary of Defense Robert Gates revealed that Pentagon lawyers (during Bush’s negotiations with Iraq) strongly opposed the compromise. But Gates explains that he believed it was worth the risk if it meant that U.S. forces could stay in Iraq past 2008. Commanders in the field were also comfortable with the compromise; after all, since members of the U.S. armed forces are on duty 24 hours a day and are not permitted to leave their bases unless on a mission, there was little chance that an American marine or soldier would ever wind up in the hands of Iraqi authorities.

Here’s how the end game played out for Obama on the issue:

In early September (2011), U.S. Deputy Secretary of State Bill Burns visited Iraq to press Maliki on both those issues. According to a former administration official familiar with what happened during the meeting, Maliki told Burns that although he could likely persuade Iraq’s parliament to request a residual force, anyone who believed that the parliament would approve a status-of-forces agreement that included complete immunity did not understand Iraqi politics. Instead, Maliki proposed signing an executive memorandum granting immunity without the need to gain parliamentary approval. White House lawyers rejected that offer, arguing that for any such agreement to be legally binding, it would have to be formally ratified by the Iraqi parliament.

In early October, as Maliki had predicted, the parliament approved the request for an extended U.S. military presence but declined to grant legal immunity to U.S. military personnel. Later that month, Obama told Maliki that all U.S. troops would leave Iraq by the end of 2011, in fulfillment of the terms of the agreement signed by the Bush administration in 2008.

The compromise offered by Maliki, Brennan writes, would have involved some risk for American service members. But not unacceptable risk:

In the nearly three years since Bush had agreed to a similar compromise, no U.S. service member or civilian official stationed in Iraq had been charged with violating an Iraqi law.

As noted above, U.S. commanders were comfortable with the legal exposure negotiated by Bush. And let’s be honest. Would the Iraqis really risk ending U.S. assistance by imprisoning a U.S. service member? And is the risk of imprisonment in Iraq really worse than the risk of death, which is implicit in any U.S. deployment?

If you want to understand how disingenuous this all was, note what Brennan writes:

It is also worth pointing out that the U.S. military personnel stationed in Iraq today count on a promise of immunity backed only by a diplomatic note signed by the Iraqi foreign minister — an assurance even less solid than the one Maliki offered (and Obama rejected) in 2011.

Get it? With catastrophe imminent by 2014, Obama actually took a lesser deal on immunity. So how big a issue would this have been in 2011 if Obama had been able to wrap his mind around the awesomeness of mistake he was making then? 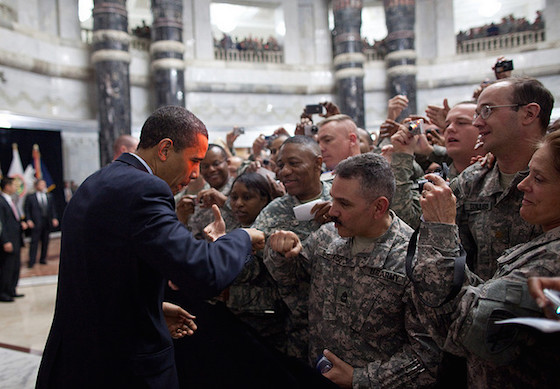 If Obama was so concerned about reaching a deal to keep troops in Iraq, why did he make their complete withdrawal into a celebration, using the “I ended the war” claim as a central plank of his reelection campaign. This provides clear proof that Obama wasn’t serious about the negotiations to begin with.

In one of the bravest moves by a commander in chief in U.S. history, Bush ignored all the conventional wisdom and, with his faith in the skill and bravery of our armed forces, ordered the surge in Iraq that won the war.

Obama turned around and lost the war. Those are the facts that Obama, and all of us, now have to live with.