Obama to Adopt the Power for Taxation for Himself

As you may have read, President Obama is considering extending his executive action bacchanal to what is a fundamental right of Congress, the power to raise taxes.

It’s quite clearly spelled out in the Constitution. There’s no ambiguity. Nothing is left to the imagination:

The Congress shall have Power To lay and collect Taxes . . .

SOMEONE NEEDS TO LET OBAMA KNOW RIGHT AWAY THAT A CONSTITUTION HAS BEEN ADOPTED.

Obama, in response to a letter from Sen. Bernie Sanders (Socialist-Vt.), which I’m sure the White House had nothing to do with, is considering curbing tax breaks that could net the government $100 billion over ten years. 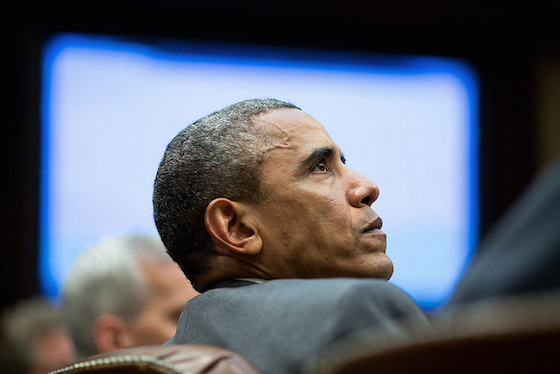 Can he do this? I dunno. Maybe. According to the Wall Street Journal, tax legislation grants the executive branch wide leeway for interpretation, meaning that the way it writes the rules can have a large effect on the impact of the law.

The point, though, is not whether this is technically possible. The point is something I’ve mentioned to you many times. It bears, in the context of this presidency, repeating.

The Founders understood that the preservation of a Republic would require leadership by virtuous men. That there would alway be powerful people weaseling around the edges and finding ways to steal liberty and adopt it for themselves – giving them the freedom to rule unfettered.

Our Constitution was made only for a moral and religious people. It is wholly inadequate to the government of any other.

I go on this great republican principle, that the people will have virtue and intelligence to select men of virtue and wisdom. Is there no virtue among us? If there be not, we are in a wretched situation. No theoretical checks — no form of government can render us secure.

When those entrusted with power by the people put their own desires above all else, that’s when the republic begins to fall apart.

This is exactly what Obama plans to do, as described by his own press secretary, Josh Earnest, who said this in justifying Obama’s consideration of raising his own taxes:

This is related to the President’s ability to use his executive authority to do what he thinks is the right thing for the country. That, after all, is what the American people elected him to do. And the fact is we haven’t seen a lot of efficient production out of Congress over the last couple of months.

Note the argument here. By saying that Obama will act because Congress has not, Earnest is implicitly acknowledging that the best and most proper way is for Congress to do this. So the rationale, as stated by the White House, involves violating the traditional roles of the branches of government.

Because Obama believes he was elected “to do what he thinks is the right thing for the country,” according to Earnest.

Actually, not. Here is the oath of office, in case the president has forgotten it. It doesn’t say much about doing what you think is right:

Fealty is to the Constitution, not to one’s policy agenda.

The Constitution Obama was elected to uphold in fact presupposes two principles – major points that Obama ignores with his executive orders.

One is that there will be disagreement about what is “the right thing” to do. So leaders must submit to a system of checks and balances that ensures no one can unilaterally decide this.

Secondly, the Constitution is a document that specifically seeks to restrain government. The argument that Congress has not been “efficient” shows utter contempt for the principle Obama was elected to defend.

Tyranny is efficient. A republic, by design, is not.

But Obama, unconstrained by the need to be reelected and irrevocably convinced of the rightness of his “thinking,” has no more need for the Constitution. And so he plans to violate it, even if he is “technically” within the law when he does it.