Thanks, but No Thanks, for the AUMF

Republicans must immediately reject President Obama’s proposed authorization for the use of military force against ISIS,  because that’s not even really what it is.

Obama already believes he has the power under current law to wage war against ISIS. What he wants is for Congress to sign onto his strategy of highly circumscribed use of force to defeat ISIS. I’m sorry “degrade and ultimately destroy” ISIS. He wants company if the strategy fails. And that he should be denied, because fail, it will.

Obama lost Iraq. He was handed a stable situation, and he blew it. His mistake was not that he fought too little, but that he wasn’t serious about leaving enough troops on hand to preserve stability and maintain U.S. influence. Every successful foreign war in which we’ve engaged that has had a good post-war outcome has involved the stationing of American troops, whether in Germany, Japan, or South Korea. Obama is about to make the same mistake in Afghanistan that he made in Iraq, withdrawing too many troops too quickly. 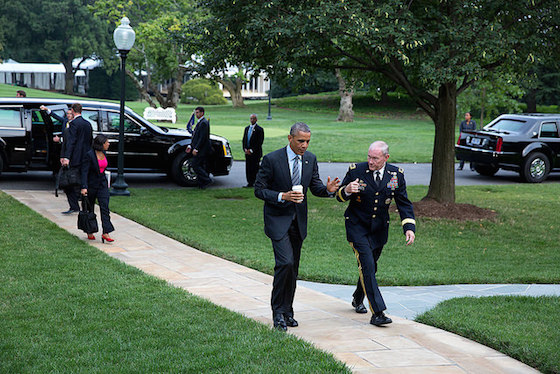 It is not a happy thing to have U.S. troops in harm’s way. But it is a fact that the wars we waged over there for the last decade kept our enemies busy and provided lines of intelligence so that we could prevent major attacks in the United States. This is a success that is being squandered by Obama’s withdrawal from the region and the growing chaos there, which has provided fertile ground for new terrorist groups to take root.

One of these is ISIS. It controls a large area of land and has the space, time and resources to plan major attacks against us. These attacks are coming. As the White House itself wrote in its proposed authorization, ISIS represents a grave threat to the national security interests of the United States. Grave threats should be eliminated forthright, not leisurely over the course of years.

Why degrade and destroy a grave threat when one has the capacity to simply destroy it?

With ISIS, Obama has a chance to correct his mistake. He can move troops in, destroy the threat, and then leave enough forces on hand to stabilize the country and keep it that way. It won’t be easy. Our troops will pay dearly for Obama’s mistake. But the other option is to allow ISIS to fester for years, kill Americans here in the United States, and permit Iran to control Iraq.

It’s a tough world we live in. Whether you thought the initial invasion of Iraq a good idea or not, we must live with the consequences. I would argue that those consequence are not worse than the nuclear arms and WMD race that would surely be occurring between Iran and Saddam Hussein right now. But that’s beside the point today.

Unfortunately, I fear that it will take an attack on the homeland to make Obama get serious, and to galvanize understandably war-weary Americans behind stronger action. I hope I’m wrong, but I fear I’m not.

According to ABC News, we can’t even track Americans who go to train with ISIS and then return here with God-know-what weapons and plans:

The U.S. government has little insight into who’s joining terrorist groups there, and who’s then leaving with what NCTC director Nicholas Rasmussen described as “training in weapons and explosives” and “access to terror networks that may be ultimately planning attacks” against the West. “It’s not even close to being under control,” FBI Deputy Assistant Director Michael Steinbach told House members.

Congress must not endorse a policy of perilous pusillanimity.

20 thoughts on “Thanks, but No Thanks, for the AUMF”