Vice President Biden and what is now more than a dozen Congressional Democrats are playing with political fire by refusing to attend the scheduled March 3 address by Benjamin Netanyahu to Congress.

Their absence will give Republicans a chance to showcase that which has become undeniably true but which may still be poorly understood by many American Jews: The best friends Israel has in America today are Republicans, not Democrats.

The traditional Jewish backing of Democrats is already eroding. Gallup polling shows a steady decline in Jewish support for Democrats and a corresponding increase in their support for Republicans. In just six years, identification with Democrats among Jews has dropped ten points, to 61 percent. 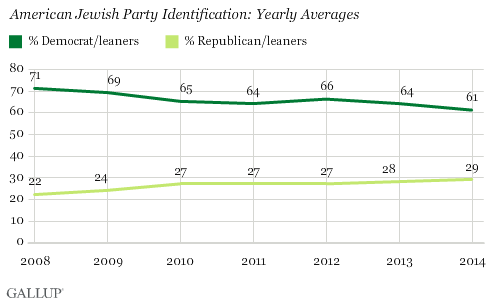 But the suspicions of some Jews about Republicans, and their susceptibility to caricatures about conservatives being, well, maniacs – and latently anti-semitic – run deep. I can’t prove it, but as an American conservative Jew, I can tell you this is my experience with my co-religionists.

What Jews will see March 3 is a Republican Party united in support of Israel’s leader, and Democrats, including the vice president of the United States, willing to insult him.

What these Democrats – caught up in their own foot stomping over House Speaker Boehner’s maneuver around the White House to bring Netanyahu to Congress – don’t fully understand is the deep emotional tie many Jews, particularly those middle aged and above, have to Israel.

There is a lingering sense of insecurity among Jews stemming from the Holocaust. Older Jews either experienced the Holocaust or know about close relatives who died in it. Those in middle age have heard these stories from family. And the young have at least read about it.

Many Jews, even in the greatest haven they have ever had, the United States of America, feel they can never know for sure that they are safe. The Jews of France and the rest of Europe are finding that out right now, and immigration to Israel from Europe is starting to boom.

This is sense of peril is exactly what Netanyahu will be addressing when he speaks to Congress. He won’t be there to discuss the items on the Seder plate. He will be warning of an existential threat posed by Iranian nuclear weapons to Israel, the country that is the ultimate guarantee for Jews.

It’s not clear at all that this will help Netanyahu in the upcoming Israeli elections. It seems pretty evident that he thinks he must speak about the danger, regardless of politics.

As Netanyahu speaks, American Jews will have to ask themselves if they really trust whatever deal President Obama is trying to work out with the Iranians, given Obama’s passivity toward threats and the lack of credibility his promises in other areas have had. And they will have to ask themselves whether they are okay with Democrats seeming so reluctant to hear Netanyahu out.

I don’t begrudge Democrats objecting to Netanyahu’s appearance. They have a right to their opinion. But to turn their back on an ally whose country is threatened with obliteration is not, shall we say, kosher.

And it may well not be kosher with Jewish voters, who may come to understand what I have experienced constantly: The sincere, abiding and even emotional commitment to Israel on the part of conservatives.

10 thoughts on “Democrats Risk a Jewish Backlash with Netanyahu Boycott”