Israeli Newspaper: Obama May Not Meet with Netanyahu Again

Israeli Prime Minister Benjamin Netanyahu is “toast” at the White House following his acceptance of an invitation to address Congress, and President Obama may never meet with him again, according to one of Israel’s leading newspapers.

Writing in the liberal Haaretz, known as “Israel’s New York Times,” diplomatic correspondent Barak Ravid paints a dire portrait of the relationship between Netanyahu and both Obama and Secretary of State Kerry, saying the animus is now deeply personal:

Senior Israeli and American officials say the White House is seething with anger against Netanyahu. Following the trick he concocted with Republican leaders in Congress, Netanyahu is said to be “toast” as far as Obama is concerned. An Israeli official said the strong words he heard American officials use against Netanyahu convinced him that even if  Netanyahu is elected on March 17 for another term, Obama wouldn’t meet him before he leaves the White House in a little less than two years.

Another man to whom Netanyahu is “toast,” at least temporarily, is Secretary of State John Kerry. In the last two years Kerry was the main defender of Netanyahu’s government in the world and Netanyahu hastened to call him for help every time he was entangled by his government’s policy.

There will, according to the article, be consequences:

This could take place when the Palestinians make another bid for statehood in an approach to the UN Security Council after the elections in Israel. An Israeli official believes that if the resolution draft is not radical and Netanyahu is still prime minister, Obama will not veto it.

At the same time, the Americans could stop their assistance to Israel in blocking the Palestinians’ move to bring Israel up on war crimes charges at the International Court of Justice. They might even push the European states to increase their pressure on Israel and impose additional sanctions on West Bank and East Jerusalem settlements.

U.S. officials believe the Netanyahu address was midwifed by Israeli Ambassador to the U.S. Ron Dermer, who is now officially persona non gratta, to the point that he will not be able to do his job, according to the piece.

The article is hostile toward Netanyahu, suggesting he has hurt Israel’s cause. 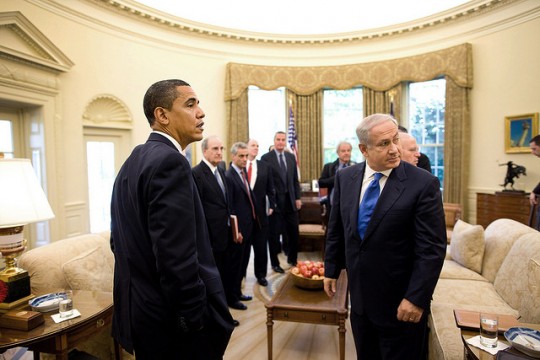 Writing today in the Wall Street Journal, Bret Stephens argues that the Obama-Bibi relationship is already in tatters, that it’s Obama’s fault, and the Netanyahu should give the speech:

Not the least of the reasons Mr. Netanyahu must not give in to pressure to cancel his speech is that he could expect to get nothing out of it from the administration, while humiliating Mr. Boehner in the bargain.

Mr. Netanyahu also needs to speak because Congress deserves an unvarnished account of the choice to which Mr. Obama proposes to put Israel: either accede to continued diplomacy with Iran, and therefore its de facto nuclearization; or strike Iran militarily in defiance of the U.S. and Mr. Obama’s concordat with Tehran . . .

Above all, Mr. Netanyahu needs to speak because Israel cannot expect indefinite support from the U.S. if it acts like a fretful and obedient client to a cavalier American patron. The margin of Israel’s security is measured not by anyone’s love but by the respect of friends and enemies alike. By giving this speech, Mr. Netanyahu is demanding that respect. Irritating the president is a small price to pay for doing so.

Indeed, the world and the United States are not being sufficiently alerted to the mortal danger Iran represents. That Netanyahu will speak in defiance of the president will dramatize the seriousness of what’s at stake.

H/T to William Koenig at World Watch Daily for flagging the Haaretz piece for me.

18 thoughts on “Israeli Newspaper: Obama May Not Meet with Netanyahu Again”