Who can even fathom the White House decision not to send the president or some other senior administration official to march along with world leaders in Paris Sunday, in solidarity with the principle that terrorists must not be permitted to rip free speech from Western civilization?

What better show of our resolve than for President Obama to lead the parade? And what better signal to our enemies about our lack of resolve than the failure of even Secretary of State John Kerry to attend?

Where was Obama? At the White House all weekend, chewing on Nicorette and watching the playoffs. Where was Vice President Biden? As usual, he’d traveled home for the weekend to Wilmington Delaware – at taxpayers expense, of course – to hang some curtains or whatever. And watch the playoffs. 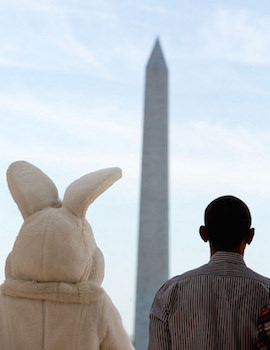 Where was Kerry? Who cares? It’s his job to fly places. In India, I think. He said it was “quibbling” to complain. But he’ll go to Paris now anyway.

Where was Attorney General Holder? Actually, he was in Paris but didn’t go to the march. Just to boggle minds even further, I suppose.

Even if security was an issue, why not send Biden or Kerry? Frankly, a vice president and a Secretary of State are dispensable. Replaceable. But how insecure could the situation have been if all those other world leaders, including Israeli Prime Minster Netanyahu, decided to make the trip?

Instead, the White House announced early Sunday morning – when it never makes announcements – that it was dusting off an old plan for a summit to counter internal terrorism threats. Not a bad idea, but quite a paltry gesture compared to showing up and being counted when it matters.

The people who run this White House have never fully understood where it was they landed. With their feet on the desks and their mouths dripping obscenities, they appear to think the White House is little more than some fancy new campaign headquarters.

And thus they don’t get the symbolism of the presidency. It’s part of why they fall down time and again when it comes to making the right gestures that are integral to showing leadership.

“We’re more concerned with the substance,” they say every time they screw up the optics. But optics are substance when it comes to leadership. They reflect inner conviction and reassure the country and the world about the president’s intent.

But this president, it seems, can’t be bothered.