The White House today announced that President Obama wants to make the first two years of community college free for all, a new bundle of free stuff that of course isn’t free and could cost taxpayers tens of billions of dollars.

The White House was careful not to put out a price tag yet. Obama wants to presumably hear only cheers, not jeers, when he travels to Knoxville, Tennessee today to officially unveil the program. But White House officials said the plan could save up to nine million students an average of $3,800. Anyone with, say, a little community college can do the math.*

Combined with the president’s drive for universal early childhood education, the community college plan is the next piece in agenda that would have taxpayers foot the bill for a cradle-to-college education.

Such spending, of course, is labeled “investment” by the White House. Unfortunately, with the tab for federal “investments” having just broken the $18-trillion mark, it might be time to scale back some of the investing. Obama, rather, is scaling up. 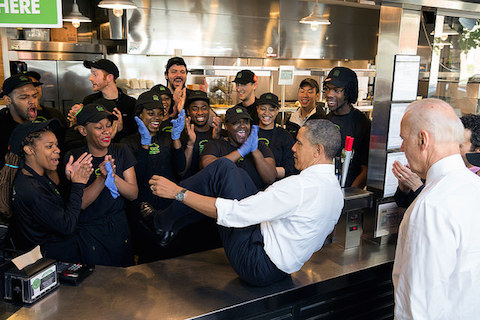 It’s not clear the investment will in this case be working very hard for you, dear taxpayer. Students need only maintain a C+ average – at a community college, not Harvard. They can attend half-time and need only show that they are making “steady progress” toward completing the two years.

Meanwhile, the federal government, which is already planning to issue “report cards” for private colleges and universities it helps fund and which is exerting control over schools through the “common core” education standards, gets even more influence over what students will learn.

According to a White House fact sheet, states participating will only have to pony up a quarter of the cost – the other three quarters a gift from the federal government, but must “coordinate high schools, community colleges, and four-year institutions to reduce the need for remediation and repeated courses and allocate a significant portion of funding based on performance.”

Uh oh. What’s does that mean? Coordination. Performance standards. I assume the Department of Education will decide how good the coordinating is going. Looks like more federal control of the curriculum to me.

“Giving away free stuff is a hard thing to compete with,” Mitt Romney said after losing the 2012 presidential election, to much criticism.

Of course, Romney hit on the eternal struggle for conservatives, opposing federal purview and spending while trying not to be cast as Grumbling Grinches. In this case, expect Obama to make the case that Republicans trying to thwart him on this don’t care about educating people – perhaps with a guest appearance by the income gap, with Obama suggesting Republicans want to keep the poor and the middle class from getting the knowledge they need for “good jobs.”

All in all, between now and 2016, we are in for a two-year education in art of class warfare.

*UPDATE: The White House said today they cost would by $60 billion over ten years.